Kalyan Singh was the chief minister of Uttar Pradesh in December 1992 when the historic structure in Ayodhya was demolished. 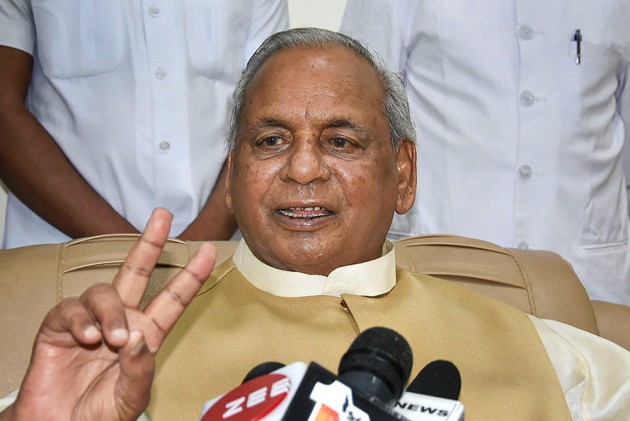 Just weeks after his term as the Rajasthan governor concluded, the Central Bureau of Investigation (CBI) on Monday moved a special court seeking summons for Kalyan Singh in the Babri Masjid demolition case.

Singh was the chief minister of Uttar Pradesh in December 1992 when the historic structure in Ayodhya was demolished. He enjoyed protection from the trail, for he held a constitutional post of a governor.

Meanwhile, on Monday, Kalraj Mishra was sworn in as the new Rajasthan governor after Singh completed his five-year term. At the party office in Lucknow, Kalyan Singh, 87, rejoined the BJP, indicating that he was keen to get back into active politics.

When questioned on Ayodhya, Singh challenged opposition parties to make clear their stand on the construction of a Ram temple at the disputed site in Ayodhya.

The CBI filed an application with the special court, seeking to summon Kalyan Singh to face trial for allegedly conspiring to demolish the Babri mosque.

The CBI court is conducting the trial of those accused in the alleged conspiracy -– including senior BJP leaders L K Advani, Murli Manohar Joshi and Uma Bharti.

For the record, the CBI court asked the agency if Kalyan Singh no longer held the constitutional post of governor.

The CBI application may be taken up on Wednesday.

Moving the application, the CBI pleaded that Kalyan Singh was charge-sheeted in 1993.

It pleaded that the Supreme Court in its order of April 19, 2017, had said Singh could not be brought to trial because of the constitutional immunity granted to governors under Article 361 of the Constitution.

The SC had, however, allowed the CBI to move for summoning the former chief minister as an accused as soon as he ceased to be a governor.

All the accused are on bail in the case which is being heard on a day-to-day basis, going by the apex court’s directions.

The SC had in 2017 ordered the revival of the demolition case. This is separate from the case to decide the ownership of the disputed Ram Janmabhoomi-Babri Masjid site.

At the BJP office, Kalyan Singh said the opposition parties should make clear their stand on Ayodhya.

"I do not want to do any politics over this. But what I want is that all political parties should make clear their stand before the people -- whether they are in favour of the construction of a Ram temple or not," he said.

After completing his five-year term in Rajasthan, Singh has officially returned to the party-fold as a primary member, rejoining in the presence of UP BJP chief Swatantra Dev Singh.

Singh rejected the suggestion on aspiring to lead the party in Uttar Pradesh, telling reporters that the BJP state president and Chief Minister Yogi Adityanath were doing a good job.

Kalyan Singh had resigned as Uttar Pradesh chief minister after the demolition of Babri Masjid on December 6, 1992.

When asked whether he aspired to head the BJP in the state, Singh said on Monday, "The UP BJP chief is doing a very good job.”

"The UP chief minister is doing a very good job. Since the time Yogi Adityanath assumed office, the condition of villages, the poor and the farmers has improved qualitatively," he added.

He also termed "satisfactory" the law and order situation in the state, saying that in the past two-and-half years of BJP rule, there has been “not a single” riot.

Answering a question on the Samajwadi Party, the Bahujan Samaj Party and the Congress, he said he did not see them staging a comeback in the state.

“They have lost their support and the mandate. They first enter into an alliance and then break it. Any party which has lost the confidence of the people cannot resurrect itself," he said.

Earlier, Singh was flanked by son Rajveer Singh, a Lok Sabha MP from Etah, and grandson Sandeep Singh, minister of state for finance in Uttar Pradesh, when he accepted the party membership.

“I consider politics as an empowering medium to serve the people. With the same feeling, I have decided to enter active politics. Till the time, I was the governor, I upheld the dignity of the post," he said.

Asked if he planned to contest elections, the former chief minister replied in the negative.

Questioned about the `morality’ of returning to active politics after holding a constitutional post, he said, "What is the immorality in this?”

“Till I was the Rajasthan governor, I upheld the dignity of the constitutional post. Whether it was the BJP government (earlier) and the Congress government now, I did not face any difficulty."

He refused to draw any comparison between Rajasthan Chief Minister Ashok Gehlot of the Congress and Vasundhara Raje, the BJP leader who held that post earlier.

Looking back at his tenure as Rajasthan governor, Singh said, "The work done by me in higher education was historic.”

“Convocation programmes were not held since 1990. More than 32 lakh students had not got their degrees. The backlog was cleared and three generations came together to receive their degrees at the same time," he said.

In Jaipur, former Union minister Kalraj Mishra was on Monday sworn in as the new Rajasthan governor.