“Thousands… subjected to murder, rape, displacement and intimidation,” NHRC wrote in its report to Calcutta high court on post-poll violence in West Bengal. 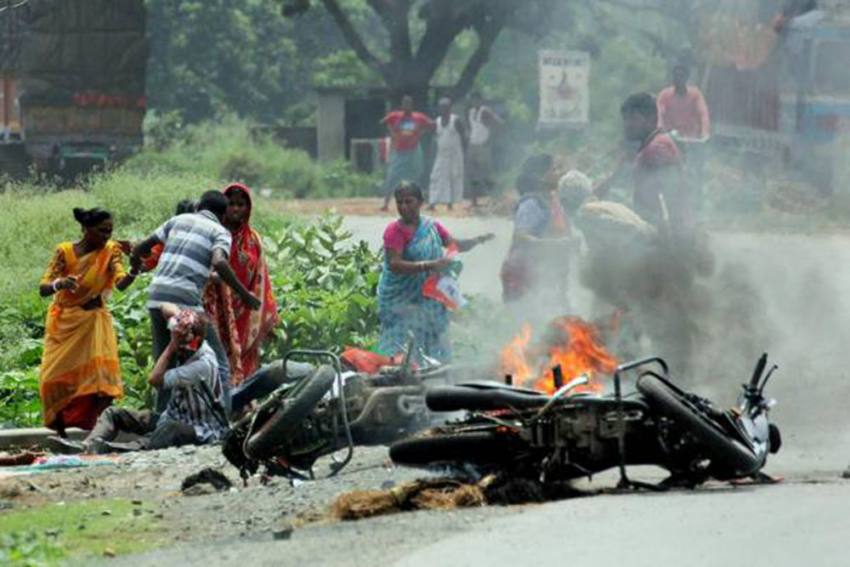 The National Human Rights Commission (NHRC) in its recommendations on post-poll violence in the state, submitted before the Calcutta high court on July 12, has expressed a complete lack of faith in Mamata Banerjee administration. The Commission recommended a CBI probe into the allegations of murder and rape, establishment of static central force pickets at sensitive villages and formation of a monitoring committee comprising officers from other states to ensure justice to the victims of political violence.

“The entire might of the governmental machinery has been used (through innumerable acts of omission and commission) for furthering the political objectives of the party in power,” said the report, titled ‘Report of the Enquiry Committee National Human Rights' Commission’, and added that if the “worrisome trend” was not arrested right now, it could spread to other states and “be the death knell for democracy in this great nation.”

“The Committee has recommended that grievous offences like murder, rape, etc., should be handed over to CBI for investigation and these cases should be tried outside the State. The other cases should be investigated by a court-monitored SIT. For adjudication, there should be fast track courts, Special public prosecutor and Witness Protection Scheme,” the recommendations said.

While arguing for handing over cases of this nature to the CBI, the report said, “There is a need to provide justice to victims and restore their confidence in the Criminal Justice System, which can be best rendered by a neutral agency.”

The recommendations also include ex-gratia compensation of Rs. 5 lakh and government job on compassionate grounds to the next of kin of the deceased, Rs 2 lakh to the survivors of sexual assault, Rs. 1 lakh to the victims who suffered vandalism/looting/destruction of their properties or suffered grievous injury, and Rs 50,000 to those who suffered from simple injuries, apart from action against “delinquent Government servants.”

“A monitoring committee should be appointed to regularly and comprehensively monitor the implementation of directions of the Hon'ble Court, given the apathy of the State Govt,” the report recommended. The monitoring committee should be headed by a retired judge of the Supreme Court or any high court and preferably have officers from outside West Bengal as observers for every district.

This NHRC-led inquiry committee was constituted by the Calcutta high court while hearing cases related to post-poll political violence alleging inaction by the state administration. The CPI(M)’s Rajya Sabha MP Bikash Ranjan Bhattacharya and BJP leader Priyanka Tibrewal are among the petitioners. The state government had appealed against the order for an NHRC-led probe but the court rejected their plea.

The report said that the inquiry committee had “no problems in obtaining logistical help from some central forces, including accommodation (because the one provided by the State government was not fit).”

“The spatio-temporal expanse of violent incidents in the state of West Bengal reflects the appalling apathy of the State Government towards the plight of victims. This was retributive violence by supporters of the ruling party against supporters of the main opposition party. It resulted in disruption of life and livelihood of thousands of people and their economic strangulation. The local Police have been grossly derelict, if not complicit, in this violence. To compound the problem, violence and intimidation have continued. There is palpable fear among victims against police and goons of the ruling party,” said the report.

The report said that a total of about 1,900 complaints had been forwarded by the NHRC to the state director general of police (DGP). As per the report of the DGP dated 10.7.2021, only 137 additional cases have been registered. “Dismal registration of cases is evident in the fact that, for instance, no case of rape was registered even though 12 complaints alleging rape had been forwarded to the DGP on 4.7.2021.”

The report also said that 12 complaints of attempts to rape and sexual molestation had been lodged in different police stations of Bengal, based on which 12 FIR had been started, but the police managed to arrest only 11 of the 53 accused persons, and of those who were arrested nine were out on bail, leaving only two persons in custody at the time of preparing the report.

Recommendations included the deployment of static pickets of central armed police forces in0 all the villages from where five or more complaints have been received (relating to murder, rape, grievous hurt, vandalism of homes, etc).

“Even if 500 pickets of 1-10 strength are deployed, it will entail deployment of less than 10 Battalions. Their objective should be to create a safe environment so as to impart confidence among the victims and to enable a safer environment for them to return or live. They will work under the local Police as per law, and the State government will provide them requisite logistics,” read one of the recommendations.