CDS Rawat Cremated With Full Military Honours, Ashes To Be Taken To Haridwar 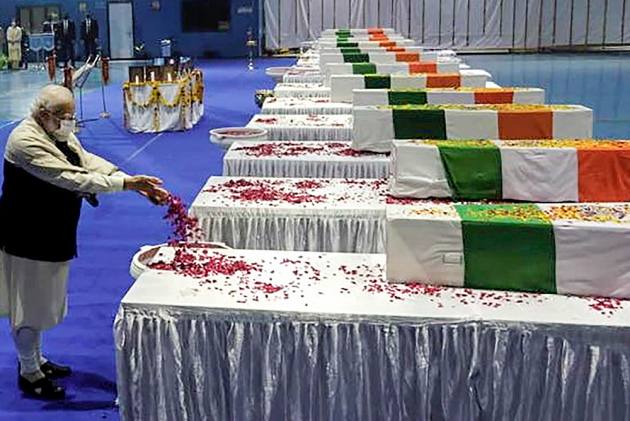 As millions watched on television and hundreds packed into Brar Square, Tarini and Kritika, the daughters  of Chief of Defence Staff General Bipin Rawat and his wife Madhulika Rawat conducted the last rites of their parents taken away from them so brutally.

Ashes of Chief of Defence Staff General Bipin Rawat and his wife, who were given a final send-off with full military honours in Delhi this evening, will be taken to Haridwar on Saturday, their family said.

The mortal remains of General Rawat and Madhulika Rawat were consigned to flames at the Brar Square crematorium in Delhi Cantonment, two days after they and 11 others, all from the armed forces, were killed in a helicopter crash in Coonoor in Tamil Nadu.

General Rawat's mortal remains were taken to the funeral site in a solemn procession from his official residence -- 3, Kamraj Marg, on a ceremonial gun carriage, which was bedecked with flowers.

Along the way, several people waved tricolours, many ran along the carriage, chanting patriotic slogans, and cries of 'amar rahe' for the Rawats.

Tarini, along with her elder sister Kritika, on Friday afternoon performed traditional rituals at their home, aided by a priest, before the mortal remains of their parents were moved to carriages for taking them to the crematorium.

"After the cremation today at Delhi Cantonment's crematorium, we will be taking his 'asthi' (ashes) to Haridwar tomorrow," Tarini, told PTI, moments before the carriage left General Rawat's official residence.

Earlier in the day, the sisters, stood in sombre silence next to the mortal remains of their father and mother, as a large number of visitors continued to stream in at the official bungalow of the Chief of Defence Staff (CDS), since morning.

"Both General Rawat and my sister were cremated on a common pyre at Brar Square. We will pick the ashes early morning tomorrow in a 'kalash' and then head to Haridwar, where the ashes will be immersed in the holy Ganga and some rituals will be performed," Yash Vardhan Singh, brother-in-law of General Rawat, said after the cremation.

A priest chanted Sanskrit shlokas and a 17-gun salute was accorded to the general in accordance with protocol at the Brar Square crematorium.

The mortal remains of General Rawat and his wife were kept at the official residence for the first half of the day on Friday for people to pay their respects.

Jaipur-based Col (retd) Vijay Rawat, 60, younger brother of Gen Rawat, said, "I had spoken to him before he went to Tamil Nadu to attend the function at Wellington. Had never thought, fate would take him away from us".

"We will be taking his ashes to Haridwar tomorrow. We family members will be going to the holy town to immerse his 'asthi' (ashes) into the Ganga river," he said before the funeral procession began.

Around 2:20 pm, amid chants of 'Vande Mataram' and 'General Rawat amar rahe', the funeral procession of the chief of defence staff and his wife left his official residence, for their final journey.

Military personnel drawn from all the three services marched towards the streets as drummers played along in tribute to the Rawats.

As India's first Chief of Defence Staff, General Rawat was tasked to bring in theatre command and jointness among the three services, and he was pushing these with a tough approach and specific timelines in the last two years.