Lavasa Dissent Letter: CEC Arora Denies Rift, Says Members Need Not Be Clones Of Each Other

CEC Sunil Arora said Ashok Lavasa's decision not to take part in model code related issues comes at a time when the poll watchdog is gearing up for the last phase of Lok Sabha polls and counting of votes. 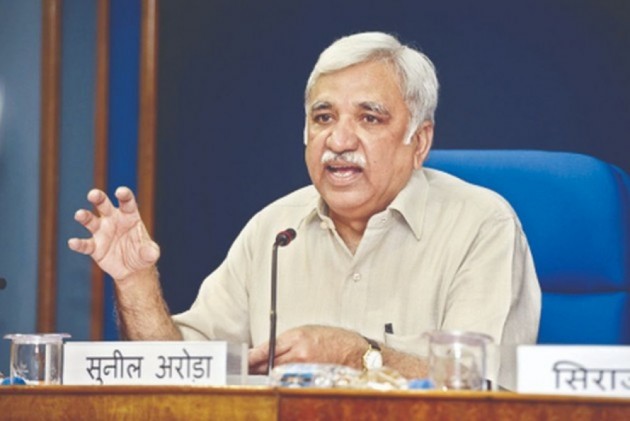 “There have been so many times in the past when there has been a vast diversion of views as it can and should be. But the same largely remained within the confines of ECI after demission of office unless appearing much later in a book written by the concerned ECs/CECs,” Arora said in a statement on Election Commissioner Ashok Lavasa’s purported letter to him.

Arora also said in the last meeting of the commission on May 14, it was "unanimously" decided to form groups to deliberate issues which arose in the course of conduct of Lok Sabha elections.

Chief Election Commissioner Sunil Arora issues statement on EC Ashok Lavasa's purported letter to him, says, 'an unsavory and avoidable controversy reported in sections of media today about internal functioning of ECI in respect of handling of Model Code of Conduct.' (3/3) pic.twitter.com/yuRxOHMaGL

"Out of the 13 issues/areas which were identified, the model code of conduct is one of them," the Chief Election Commissioner said.

He said the report on Lavasa's decision not to take part in model code related issues comes at a time when the poll watchdog is gearing up for the last phase of Lok Sabha polls and counting of votes.

Lavasa, who has recused himself from meetings related to the Model Code of Conduct (MCC), has written a letter to Arora stating that he is forced to stay away from the meetings of the Full Commission since "minority decisions" were not being recorded.

Lavasa, in his letter, insisted that he would attend the meetings if his minority decisions were also included in the orders of the Commission.

Reports said that Lavasa has expressed his dissent on clean chit to four speeches of PM Narendra Modi and one speech of BJP president Amit Shah.

On May 4, the Election Commission said that Modi did not violate the model code in his speech in Gujarat's Patan on April 21. The Prime Minister had said that his government kept Pakistan on its toes to secure the safe release of IAF Wing Commander Abhinandan Varthaman.

This was his sixth speech to be cleared by the poll body. The EC also found nothing wrong in Modi's speech in Nanded, Maharashtra, in which he reportedly referred to the Congress as a "sinking Titanic".

Earlier, the poll body cleared Modi's April 1 speech in Wardha, where he attacked Congress President Rahul Gandhi for selectively contesting from a minority-dominated seat in Kerala.

The poll body also cleared him for his April 9 appeal to first-time voters in Latur to dedicate their first vote to "the Pulwama martyrs".