The bird census conducted on Tuesday revealed that more than 11.42 lakh birds have come to the lagoon this year which is more than previous year's 11.04 lakh winged visitors 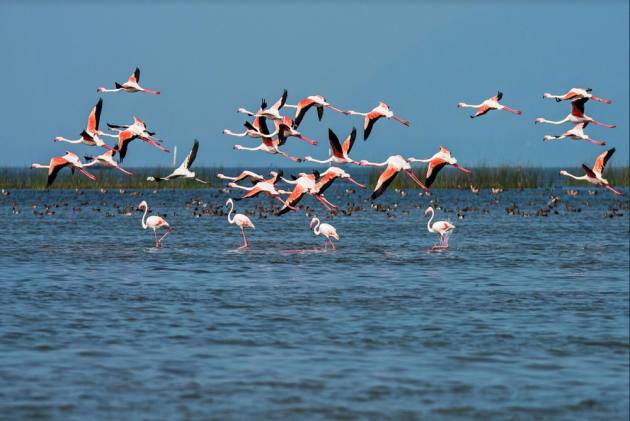 The bird census conducted on Tuesday revealed that more than 11.42 lakh birds have come to the lagoon this year which is more than previous year's 11.04 lakh winged visitors, they said.

He said the population of avifauna is the best indicator of the health of a wetland ecosystem.

Nanda, also a wildlife lover, said: "Wetland ecosystems are highly resilient and bounce back to normalcy in shortest possible time. Chilika is a safe haven for the migratory birds."

While 184 bird species flew to the lagoon last year, their number this time in 2021 increased to 190 species, Nanda said, adding that this is the highest ever bird count in Chilika lake.

Of the 190 species of birds that visited the lagoon this year, 111 species were migratory birds from different countries while 79 species were Indian birds.

The annual bird census was conducted in five ranges like Tangi, Balugaon, Rambha, Satapada and Chilika, under the Chilika Wildlife Division.

Twenty-one teams comprising over 111 wildlife officials, experts, volunteers and environmentalists were engaged in the exercise which began at 6 AM and concluded at around 12.30 PM of Tuesday, the official said.

The census teams also include staffers of CDA, experts from Odisha University of Agriculture and Technology (OUAT) and the members of the Pakhi Suraksha Samiti (Bird Protection Group).

He said most of the migratory birds fly from Russia, Mongolia, Siberia, Central and Southeast Asia, Caspian Sea, Ladakh and Himalayas every year on the onset of winter.

The lake is spread over an area of 1,100 square kilometres in three districts - Puri, Khurda and Ganjam.