More than 400 have so far been cured and discharged, while nearly 1.1 lakh Coronavirus tests have been conducted so far in the country, as per official announcements. 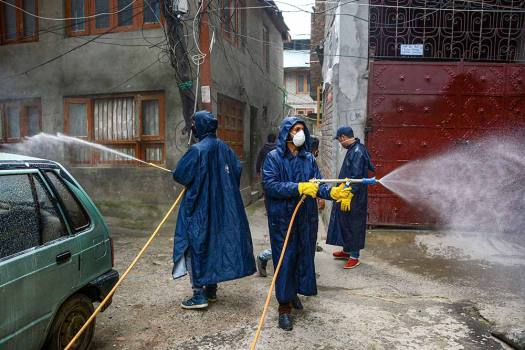 The nationwide tally of confirmed COVID-19 cases neared 5,200 on Tuesday amid hectic discussions for a possible extension of the 21-day lockdown beyond April 14 as several states announced plans to ramp up their testing infrastructure and put in place strong 'cluster containment' plans in areas identified as hotspots of the outbreak.

There were also indications about possible relaxations from a complete lockdown for some sectors, including agriculture and unorganised labour sector, at least in some states, while there were also talks about even stronger area-specific restrictions in some places.

A PTI tally of figures reported by various states as on Tuesday 9.45 PM showed 5,192 testing positive across the country and at least 162 deaths. The Union Health Ministry's evening update, however, showed 4,789 confirmed cases and 124 deaths.

More than 400 have so far been cured and discharged, while nearly 1.1 lakh tests have been conducted so far in the country, as per official announcements. Also, while some states including Maharashtra reported a significant increase in the numbers, several states did not report a single additional positive case.

Officials said that the lockdown and social distancing measures have helped contain the pandemic in a big way in India. Citing an ICMR study, the Health Ministry said just one COVID-19 patient can infect as many as 406 people in 30 days in the absence of preventive measures such as social distancing and the lockdown.

With the preventive measures, the possibility of the infection can be reduced to an average of just two-and-a-half persons per patient in the same period, Health Ministry Joint Secretary Lav Agarwal said in the central government's daily briefing on COVID-19.

He said social distancing works like a "social vaccine" in management of COVID-19, but refrained from commenting on whether the ongoing nationwide lockdown would be extended or lifted after April 14.

"Whenever a decision is taken, it will be informed. Till a decision is officially communicated, please refrain from speculation," he said.

Government sources, however, said many state governments and experts are requesting the Centre to extend the lockdown and the central government is thinking in that direction.

There has been a nationwide lockdown since March 25, though some states had initiated such measures a few days earlier, to check the pandemic that has claimed more than 75,000 lives worldwide since its emergence in China last December. Over 13 lakh people have tested positive for the virus across the world so far.

Some states, however, indicated that the lockdown conditions could be relaxed for some segments.

West Bengal Chief Minister Mamata Banerjee said some relaxation on work front for unorganised sector workers was on anvil. She, however, made it clear that all must practice social distancing. The state government has identified seven COVID-19 hotspots in West Bengal.

Madhya Pradesh Chief Minister Shivraj Singh Chouhan, however, said his government will extend the lockdown if needed, while his counterpart in Rajasthan, Ashok Gehlot, said the state cannot withdraw the lockdown immediately and it has to be done in a phased manner.

A Karnataka government minister said it's too early to take a call now on lifting the nation-wide lockdown but appeared favouring an extension by at least two weeks.

Also Read: Quarantine Over, Is It Safe To Meet Family? To Test Or Not To Test For Coronaovirus Is The Question

Addressing his ministers through video conferencing on Monday, Prime Minister Narendra Modi had also indicated towards a graded approach to lift the lockdown.

The Prime Minister had also asked the ministers whether the restrictions should be lifted sector-wise or district-wise, a source said.

Modi has also asked the ministers to lay out plans to contain the economic impact of the pandemic.

Several states, including Uttar Pradesh and Rajasthan, also announced plans to ramp up the tests, while numerous leaders across the country urged the people to strictly follow the lockdown and social distancing measures including for religious rituals.

Gehlot, the Rajasthan chief minister, said the state will start rapid testing within a week and that  it has ordered 10 lakh testing kits from China.

Delhi Chief Minister Arvind Kejriwal announced a five-point action plan of "five Ts -- testing, tracing, treatment, team-work and tracking -- and monitoring" to contain the virus spread and said one lakh random rapid COVID-19 tests will be conducted in the city's hotspot areas. He said arrangements have been made to deal with as many as 30,000 cases.

Gujarat government has also decided to implement a cluster containment plan across 15 localities in four cities, which involves a complete lockdown of these areas.

Fresh cases were reported from Delhi, Punjab, Madhya Pradesh, Telangana, Haryana, Kerala, Jammu & Kashmir, Gujarat, Karnataka, Rajasthan, Uttar Pradesh and Tamil Nadu among other states, while Maharashtra reported at least 150 more testing positive to take the state's tally to 1,018. Maharashtra is the only state to have crossed the 1,000-mark in terms of positive cases while 12 more died in the state on Monday to take the toll to 64. At least 40 have died in Mumbai alone while more than 600 have tested positive in the country's financial capital.