Ram Vilas Paswan questioned if the opposition leaders do not want the economically weaker sections to use sanitizers and masks. 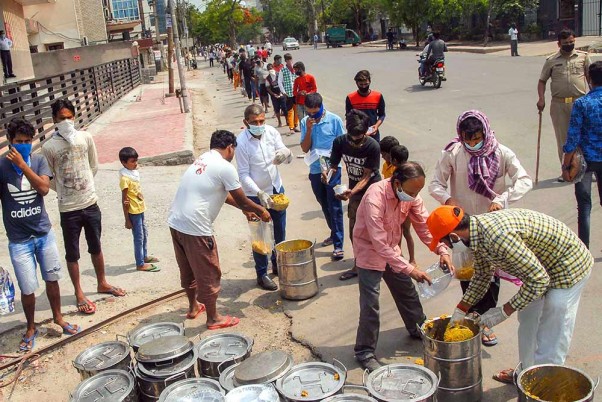 The Centre’s decision to use surplus rice for making ethanol-based sanitizers triggered a political row on Tuesday with Congress leader Rahul Gandhi claiming that while the poor are dying of hunger, the government is busy cleaning the hands of the rich, evoking a sharp response from Union Minister Ram Vilas Paswan, who asserted that there was no shortage of food grains for the poor and asked Gandhi to shun his "negative mindset".

The Kerala government also slammed the Centre for the decision with state finance minister Thomas Isaac questioning the "rationale of diverting food grains" to make sanitizers when cheaper options including soap and water were available.

The reactions from the opposition leaders came a day after the Centre approved that surplus rice available with Food Corporation of India (FCI) can be used for converting into ethanol to manufacture alcohol-based hand-sanitizers and also for blending with petrol. The decision was taken at a meeting of the National Biofuel Coordination Committee (NBCC).

"After all, when will India's poor wake up? You are dying of hunger and they are busy cleaning the hands of the rich by making sanitizers from your portion of rice," Gandhi said in a tweet in Hindi. The opposition leader also attached with his tweet a news report about government's decision.

After Gandhi’s attack, Paswan hit back and questioned if the opposition leader does not want the economically weaker sections to use sanitizers and masks.

"Does he (Gandhi) want only the rich to use sanitizers and masks while India battles the coronavirus? Should the poor be left to die? It is our long-term planning to have so many sanitizers that the poor can also afford it. He should shun this negative mindset which is dangerous for the country," Paswan told reporters.

Sources in the ruling BJP-led NDA said it was decided to field Paswan to take on Gandhi as the matter is related to his ministry, and he is also seen as a credible voice on the matter.

The Consumer Affairs, Food and Public Distribution minister said the Modi government is committed to the poor and it has over 18 months stock of grains to supply over 81 crore beneficiaries of the public distribution system (PDS).

"One priority is that nobody goes hungry. I believe it is wrong to say that things like sanitizers or masks are for the use of the rich. We want that even poor can use them," Paswan said.

While the central government has made adequate provision of grains, it is the responsibility of states to ensure that they are supplied to intended beneficiaries in time, he added.

Gandhi should rather find out if poor people in some places are still hungry and bring it to the notice of the state concerned or the Centre, the Lok Janshakti Party leader said.

He noted that the government had already announced free ration for three months to PDS beneficiaries and asked states to give them three month of rations on credit.

After the Central government’s decision, senior Congress leader Manish Tiwari on Monday had tweeted "doesn’t the rice to ethanol decision for sanitizers, and blending fuel not mock the poor and hungry especially when crude is at USD 10- 12 a barrel ?”