Agriculture minister Narendra Singh Tomar also said that the Centre has not received any information on losses incurred by farmers for not being able to sell their produce in the national capital owing to the farmers' protest. 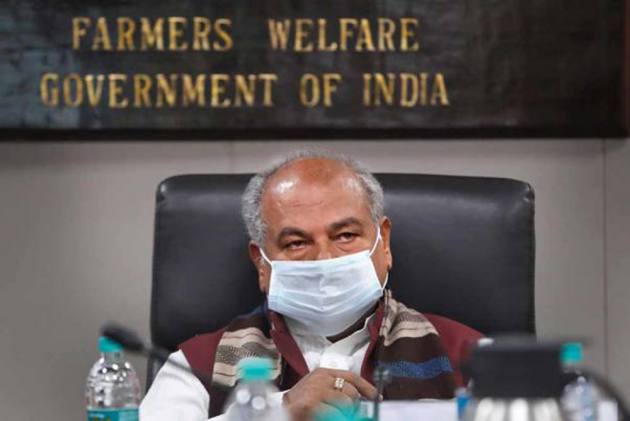 Opposition parties staged protests in Parliament on Tuesday over the recently passed agriculture legislations, resulting in the adjournment of Lok Sabha twice, for nearly three hours.

Responding to the Opposition, the ruling BJP asserted that it was ready to discuss issues related to farmers both inside and outside Parliament.

However, earlier today Samyukta Kisan Morcha (SKM), an umbrella organisation of various farm unions said that it will not hold talks with the Centre until all detained farmers are released.

No Talks With Centre Until All Detained Farmers Are Freed: Protesting Farm Unions

Agriculture minister Narendra Singh Tomar said during Zero Hour, which began at 5 pm, that the Modi government is always committed to discuss the farmer's issues.

"Government is ready to discuss issues related to farmers inside and outside Parliament," he said amid sloganeering by Opposition members.

Tomar's reply came after Congress leader in Lok Sabha Adhir Ranjan Chowdhury claimed that 170 farmers have died during the ongoing agitation against the three contentious farm laws. "Atrocities are being committed on farmers. Situation is similar to British rule," he alleged.
As Opposition members, including those from Congress, DMK, Trinamool Congress, SP and BSP, trooped near the well, Speaker Om Birla appealed to them to go back to their seats so that House can taken up normal business. "This House is for debate and discussions. Please go back to your seats," he said.

However, the unrelenting Opposition continued their protests, leading to the Speaking announcing the second adjournment till 7 pm.

Tomar also said that the Centre has not received any information on losses incurred by farmers for not being able to sell their produce in the national capital owing to the farmers' protest.

"Government of India has not received any information of loss to the farmers due to closed borders barring them to sell their produce to national capital. Hence, the question of compensation for loss of produce does not arise," Tomar said in a written reply in the Lok Sabha.

Earlier, as soon as the House met at 4 pm, opposition members disrupted the Question Hour to press for repeal of the three "black" laws and raised slogans.

Members from the Shiv Sena were seen raising slogans from the aisles. Former Union minister Harsimrat Kaur Badal of the Shiromani Akali Dal was also seen holding a poster demanding repeal of the contentious agriculture legislations.

The Speaker urged the members to return to their seats and follow the Covid-19 protocol. He said in the ongoing Question Hour, questions related to farmers were listed and members can raise their issues at that time.

He also said during the debate on the Motion of Thanks to the President's address, members can raise these issues. But opposition members refused to relent forcing him to adjourn the proceedings around 4.10 pm.

The agitating unions are demanding repeal of these three laws. So far, 11 rounds of negotiations have been held between the government and the farmer unions to resolve the issues.

The Centre has offered concessions including keeping the laws on hold for 1-1.5 years, which unions have rejected. The government, however, in the last meeting had asked the unions to reconsider its offer and convey their final decision.

Meanwhile, a Supreme Court-appointed committee is also looking into the matter. The panel, which has to submit its report in two months, has so far held two rounds of consultations with the farmers.