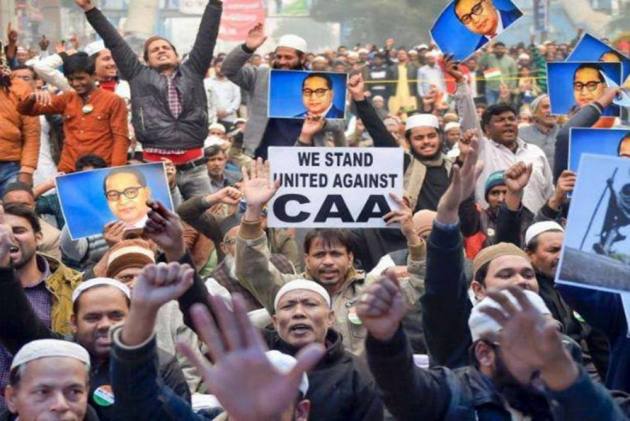 The Union home ministry on Friday night issued a notification seeking applications for citizenship from non-Muslims residing in 13 districts of Gujarat, Rajasthan, Chhattisgarh, Haryana and Punjab.

Under the old set of rules, non-Muslims belonging to Afghanistan, Bangladesh and Pakistan can apply for Indian citizenship provided they have resided in India for a minimum of 11 years.

Under the CAA, the period for this category was cut to five years. However, the Centre is yet to formulate rules under the CAA.

"In exercise of powers conferred under Section 16 of the Citizenship Act, 1955 (57 of 1955), the central government hereby directs that powers exercisable by it for registration as citizen of India under Section 5, or for grant of certificate of naturalisation under section 6 of the Citizenship Act 1955 in respect of any person belonging to a minority community in Afghanistan, Bangladesh and Pakistan namely, Hindus, Sikhs, Buddhists, Jains, Parsis and Christians, residing in the districts mentioned and the states mentioned below....," the fresh notification said.

People who are eligible to apply for Indian citizenship are those currently living in the districts of Morbi, Rajkot, Patan and Vadodara of Gujarat, Durg and Balodabazar in Chhattisgarh, Jalore, Udaipur, Pali, Barmer and Sirohi in Rajasthan, Faridabad in Haryana and Jalandhar in Punjab.

In 2016, the central government had in a similar step sought applications from members of these minority communities from Afghanistan, Pakistan and Bangladesh living in 16 districts in Gujarat, Madhya Pradesh, Maharashtra, Delhi, Uttar Pradesh, Rajasthan and Chhattisgarh.

The district magistrates of the districts and home secretaries of the seven states were allowed to receive and process the applications of these refugees for two years by the home ministry.

In 2018, the said notification was extended for an indefinite period or till further order.
With Friday night's order, the total number of districts where such facility is available has gone up to 29 districts in nine states.

The collector or the secretary will make enquiries as considered necessary for ascertaining the suitability of the applicant and for that purpose forward the application online to such agencies for verification and comments.

The instructions issued by the Centre from time-to-time in this regard shall be strictly complied with by state or union territory and district concerned, it said.

"The comments of the agencies referred to in clause (C) are uploaded online by such agencies and accessible to the collector or the secretary, as the case may be, and the central government," it said.

The collector or the secretary on being satisfied with the suitability of the applicant, will grant him the citizenship of India by registration or naturalisation and issue a certificate of registration or naturalisation, as the case may be, duly printed from an online portal and signed by the collector or the secretary in the form as prescribed in the said rules, the notification said.

The collector or the secretary shall maintain an online as well as physical register, in accordance with the said rules, containing the details of the person registered or naturalised as a citizen of India and furnish a copy thereof to the central government within seven days of such registration or naturalisation, it said.

"This order shall come into force on the date of its publication in the official gazette and shall remain valid until further orders," the notification said.

When the CAA was passed in 2019, there were widespread protests in different parts of the country and communal riots erupted in Northeast Delhi in early 2020 after clashes between those opposing and supporting the law.

According to the CAA, Indian citizenship will be given to non-Muslim persecuted minorities from Bangladesh, Pakistan and Afghanistan -- Hindu, Sikh, Jain, Buddhist, Parsi and Christian -- who had come to India till December 31, 2014.