Challenges And The Way Forward For Women in Politics

The biggest embodiment of the widespread resistance against greater female participation in political processes is the consistent opposition to women’s reservation bills which have been introduced and failed to pass in 1996, and again in 1998, 1999 and 2002. 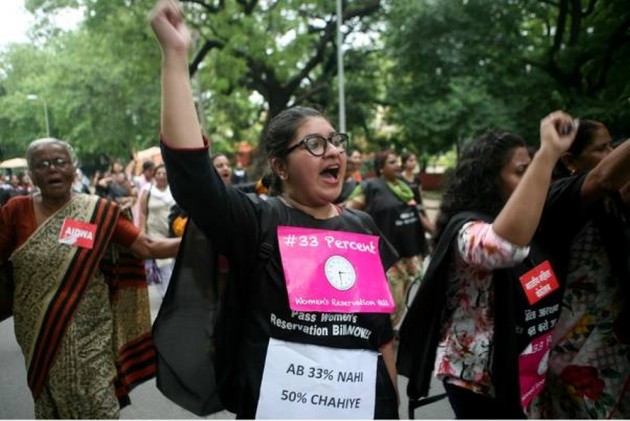 As India gears up for the world’s largest election process, one cannot help but think of some of the unfulfilled promises made when a young India emerged amongst the preeminent democracies of the world. Nearly 70 years since the enactment of our Constitution, the solemn vow in its Preamble to secure political justice and equality of opportunity remains only partially fulfilled. Women’s position in electoral politics and governance stays far below representative levels, and policymaking and governance has long been the fiefdom of men, with few women managing to get past a rigid glass ceiling to enter Parliament.

The entry of women into politics has historically been met with dogged opposition across the world – right from the earliest suffragettes in England who faced police brutality and sexual assault for daring to demand the right to vote, to modern elections where female candidates are attacked overtly and covertly on gender issues. While there have been many significant victories for women’s participation in politics in the intervening years, they are still met with scepticism, ridicule and objectification when stepping into the political fray. These are manifestations of an insecure patriarchy, jolted by the notion of women taking their place as leaders and decision-makers, representing their issues and interests instead of depending on men in power to do so.

Certain laws and policies, however, have given a boost to the representation of women in Indian politics. On 24 April 1993, the Constitutional (73rd Amendment) Act 1992 was passed, adding Part IX to the Constitution, giving constitutional recognition to Panchayati Raj Institutions (PRIs). A new Article 243 D reserved a third of all PRI seats and the same proportion of offices of Chairperson for women, ushering in an era of female political representation across India’s villages. In subsequent years, a number of states including Andhra Pradesh, Bihar, Jharkhand, Kerala, Maharashtra and Tripura increased this reservation to 50%, and also provided for a similar reservation in Urban Local Bodies (ULBs).

Women's Reservation Bill: Twenty-Three Years And Counting... Will It See The Light Of Day?

Indeed, women have shown themselves to be natural community builders, with an intrinsic sense of perception, intuition and empathy that allows them to best identify people’s problems, provide adequate support and act as nurturing leaders. Despite some enabling legal provisions, however, social and economic forces continue to deter women from politics. The phenomenon of Panchayat Patis – husbands (or other male relatives) using women as proxies in PRIs and wielding the real power – is prevalent. In ULBs, despite women often holding powerful posts, such as that of mayor, corporators and municipal officials, they are often reluctant to provide the adequate support to such leader – simultaneously intimidated and antagonised by women in positions of power and responsibility.

Beyond the district level, in matters related to Legislative Assemblies and the Lok Sabha, the challenges against women are even more pronounced. Political parties, with all their organisational and financial might, are far more prominent in this higher level of electoral politics. The careful calculus of electoral politics means that parties are usually unwilling to grant women candidature from seats seen as “winnable” – as these are not seen as gender neutral seats, but male bastions. More often than not, women are given the role of a second fiddle – granted candidature from uncertain seats where the party is not too confident of its chances. When suddenly pitted against scores of male candidates, women are often at a disadvantage, lacking tutelage that members of an unofficial boys’ club within politics often benefit from.

The biggest embodiment of the widespread resistance against greater female participation in political processes is the consistent opposition to women’s reservation bills. Bills to secure a third of the seats in the Lok Sabha for women candidates have been introduced and failed to pass in 1996, and again in 1998, 1999 and 2002. The current version of this, the Constitution (108th Amendment) Bill was pushed through the Rajya Sabha in 2010 with unequivocal support from the BJP and the Left. However, it did not make it past the Lok Sabha, and lapsed yet again. Despite women having held various constitutional posts – from the Speaker of the House to Chief Ministers, Union Ministers and even Prime Ministerial and Presidential posts, a venomous patriarchy continues to resist a more equitable distribution of political power.

Another challenge is the question of funding – any pragmatic observer will admit that fighting an election is an expensive proposition. Given the low financial power of women in society on an average as compared with men, this becomes an additional hurdle, with most female candidates dipping into their personal or family coffers to fight this uphill battle, or relying on monetary help from supporters.

A new era of politics also brings with it new challenges. As political battlefields transform from the maidan of old to online arenas such as social media platforms like Twitter and WhatsApp groups, campaigning has seen a sea change. A credible candidate must now also have a digital-outreach plan, which requires formal structure and support to organise and execute. This necessitates time, workers and money, all of which are more easily available to male candidates.

While women representatives have historically been better qualified than their male counterparts on an average – evidenced by the fact that in the 15th Lok Sabha, 41 out of 59 women MPs were graduates and above – they lack the infrastructure and support required to harness new tools of campaigning

With all these challenges in mind, what could be a way forward? The passage of the Women’s Reservation Bill would be an important step, allowing greater participation in the highest level of India’s politics. Here, it is important to underline and differentiate the Indian perspective on quotas from that of the West. Unlike the West, where quotas are almost a bad word, the Indian paradigm has seen such quotas emerge as invaluable tools for social leverage. They are redistributive tools meant to ameliorate centuries of continued oppression. Even once women are on the same table as men in politics, they may continue to face the challenges mentioned.

For the dedicated campaigner for equal rights, it is important to remember that the struggle for empowerment is a long one. While the number of women candidates, as well as elected members, has steadily risen, growing from 326 candidates and 37 victors in 1991 to 668 candidates and 62 victors in 2014, this still counts for only 11.8% of total seats in the Lok Sabha. Far from the 50% target set by the UN’s Sustainable Development Goal on Gender Equality, this is half of the 23.5% global average, signalling the need for continued and dedicated action on this front. This should be a non-partisan issue, with all political parties uniting and supporting policy changes that make politics more representative. The promise of equality is a beautiful one, and one worth continuing to strive for in the face of daunting odds. In the inimitable words of the late Maya Angelou, ‘We may encounter many defeats, but we must not be defeated.’