Banks of the Chorabari lake in Kedarnath collapsed due to a cloudburst in 2013, leading to widespread destruction. 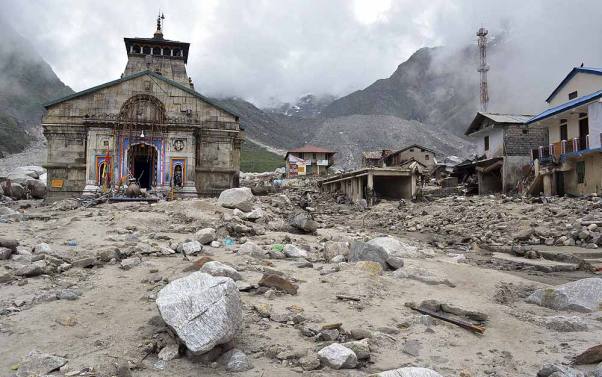 The massive flood which took place in the Dhauli Ganga river on Sunday in the Chamoli district of Uttarakhand came as a grim reminder of the 2013 catastrophe in Kedarnath which led to widespread devastation in the ecologically fragile Himalayan region.

The torrential rains of unseen magnitude had struck Kedarnath on 16-17 June back in 2013 resulting in several people losing their lives, their loved ones and their homes.

The banks of the Chorabari lake in Kedarnath collapsed due to a cloudburst that had resulted in a major flash flood causing widespread destruction in Uttarakhand and led to heavy losses to infrastructure, agriculture lands, human and animal lives.

UP On High Alert After After Flash Floods In Neighbouring Uttarakhand

Contrary to the bad weather that delayed the launch of relief and rescue operations after the Kedarnath deluge whose magnitude could not be immediately realised, the clear weather on Sunday allowed helicopters to reach the affected areas quickly.

Uttarakhand DGP Ashok Kumar said all efforts at the moment are focused on tracing those who went missing after the flood.

Over 150 labourers working at a power project in Tapovan-Reni are feared dead, an Indo-Tibetan Border Police spokesperson said while quoting the project-in charge. Three bodies have been recovered so far.

According to the Uttarakhand police chief, the power project has been swept away completely.

Chief Minister Trivendra Singh Rawat also lost no time in rushing to the affected areas of Tapovan and Raini to take stock of the situation on the ground. He said relief and rescue operations are being carried out on a war footing in the affected areas.

Prime Minister Narendra Modi and Home Minister Amit Shah are constantly in touch with the chief minister assuring of all possible help.

Homes along the way of the deluge were swept away as the waters rushed down the mountainsides in a raging torrent. There were fears of damage in human settlements downstream, including in heavily populated areas. Many villages were evacuated and people took to safer areas.

With PTI Inputs
Connectivity with some border posts was "totally restricted" due to a bridge collapsing near Reni village, an ITBP spokesperson said.