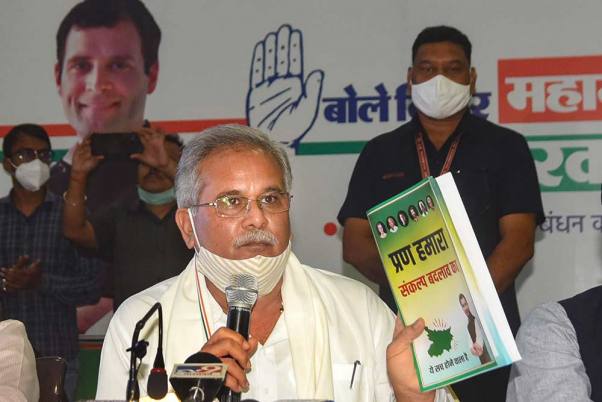 In his letter, Baghel has suggested a five-point action plan and sought the Centre's cooperation in its implementation in Naxal-hit areas, particularly in the Bastar region, state officials said.

In his letter, the chief minister emphasised the need for employment opportunities in Naxal-hit areas saying that only jobs can stop the unemployed youth from joining Naxal groups. "Iron ore is available in abundance in Bastar. If iron ore is provided at 30 per cent discount to steel plants in the region, it will attract investment to the tune of several crore rupees in the sector, thus providing direct and indirect employment opportunities in remote areas," Baghel said in his letter.

Electricity through grid power supply has not yet reached a large part of the state’s remote areas. Hence, the establishment of a large number of solar power plants will help meet the energy needs of people and bring about economic development, the CM added in his letter. Baghel also said there is a need to give generous grants for setting up processing units and cold chains in remote areas of the state.

Officials also said that Baghel has sought the Centre’s assistance for carrying out the proposed Bodhghat Multipurpose Irrigation Project on the Indravati river in Bastar district.
The CM pointed out there is no separate financial grant from the Centre to 'aspirational districts', officials added. Seven districts part of the Bastar region have been identified as aspirational districts and at least Rs 50 crore should be given annually to the collector of each of these districts for development purposes, Baghel said in his letter.

Implementation of these suggestions would help in rooting out Naxalism from Chhattisgarh in the next few years, Baghel added.

The CM also expressed happiness that the Centre planned to send five CRPF battalions, for deployment in Bastar. The chief minister had written to Shah in September seeking deployment of seven CRPF battalions, which were sanctioned for the state in 2018, but had not been dispatched, officials said.