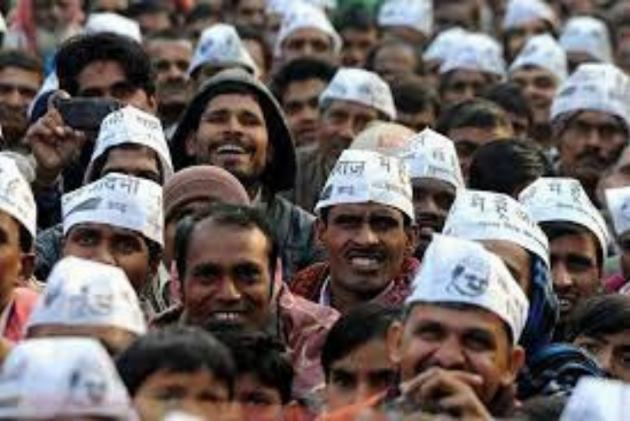 New entrant Aam Aadmi Party has emerged as the leading party winning 13 of 35 wards so far as the counting of votes in the Chandigarh Municipal Corporation polls is in progress here on Monday.

In a setback to the ruling BJP, sitting mayor and party candidate Ravi Kant Sharma was defeated by AAP's Damanpreet Singh, according to results declared so far.

Counting of votes is underway for the election held here on Friday.

While the AAP, which was contesting the Chandigarh MC polls for the first time, has so far won 13 wards, the BJP and the Congress have bagged 10 and five wards, respectively. The Shiromani Akali Dal (SAD) bagged one seat.

Sharma lost his seat to Singh from ward number 17 by a margin of 828 votes.

Nine counting centres have been set up for 35 wards of the municipal corporation.

Traditionally, the municipal election - held every five years - sees a locking of horns between the BJP and the Congress, but the AAP's entry made the contest this time triangular.

The Bharatiya Janata Party (BJP) holds a majority in the current municipal body.

Reacting to his win, AAP's Singh said he gives credit for this victory to "my guru (Chandigarh AAP leader) Pradeep Chhabra and our role model Arvind Kejriwal... Work is always appreciated and it has paid dividends today".

Hitting out at the BJP and Congress, Chadha said, "During the past 25 years, these parties have ruled the Chandigarh Municipal Corporation. Of this, the BJP has been in power for 13 years while the Congress has remained in power for 12 years. People were fed up with these traditional parties which failed to deliver despite being given repeated chance and they were looking for an honest, viable alternative."

"These two traditional parties failed to undertake development and bring about a change in the system, which people wanted. People saw how an ordinary councillor, who used to roam on bicycle and scooter, has big farmhouses and accumulated properties, people were fed up with all this and were looking for a viable alternative," said Chadha.

"The AAP, which was fighting these polls for the first time, has done well. People gave their so much support and I thank our workers, leaders for this. And I salute the people of Chandigarh that this time they did not support traditional parties BJP and Congress and gave chance to a new, honest party," Chadha further said.

Asked if MC results in Chandigarh, which is the common capital of Punjab and Haryana, will have any impact on the upcoming Punjab assembly polls, Chadha quipped, "This is just a trailer. 'Chandigarh abhi Jhanki hai, Punjab abhi baki hai'. The mood of the people here will be seen in upcoming Punjab polls too".

"People of Chandigarh have given one chance to Kejriwal, people of Punjab too will give us one chance," he added.

In the last MC elections, the BJP had won 20 seats and its erstwhile ally SAD one. The Congress had managed to win only four seats.

The BJP fought the election on plank of its "achievements" in the past five years. On the other hand, the Congress and the AAP targeted the BJP for allegedly failing to undertake development work and criticised it over the city going down in the "Swachh Survekshan" (cleanliness survey) rankings.

The two parties also targeted the BJP for not resolving the issue of the Dadumajra dumping ground besides those of rise in prices of essential commodities.