A large number of TDP supporters violated physical distancing norms at several places as they jostled to greet Naidu. 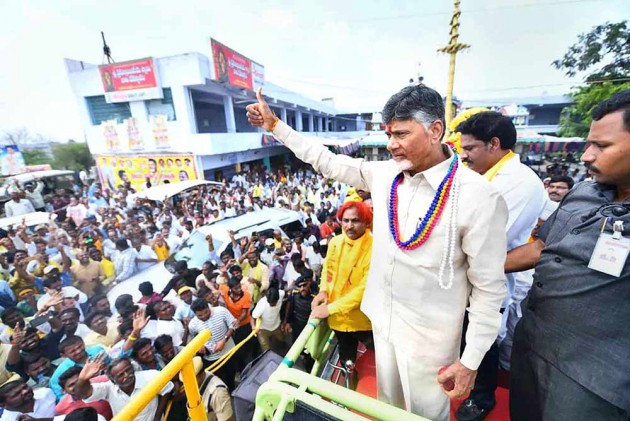 Telugu Desam Party leader and former chief minister of Andhra Pradesh N Chandrababu Naidu's long-awaited crossover from Telangana to his own state has drawn sharp reactions from the ruling YSR Congress as he was welcomed by a large swathe of followers violating lockdown norms.

Accompanied by his son Nara Lokesh, the TDP supremo entered AP by road on Monday as party supporters lined up along the roadside to welcome his entry to the state after he was stranded due to the lockdown for almost two months. However, the supporters violated physical distancing norms at several places as they jostled to greet Naidu.

Criticising the 70-year-old TDP chief for the incident, ruling-YSRCP's leader Gadikota Srikanth Reddy told news agency ANI: "The whole country is following lockdown till May 31 and everybody is maintaining social distancing and following other guidelines linked to COVID-19. However, Chandrababu Naidu took out a rally from Hyderabad where hundreds gathered, garlanded him without using masks. Being a senior politician how could he do so? He should apologise."

Reddy also demanded that the opposition leader should go to quarantine.

"Coming from a red zone, he should go into quarantine. Chandrababu Naidu, however, is trying to politicise the situation. He was playing politics through the Zoom app while he was in Hyderabad and suddenly he came in a big convoy. He should be quarantined as he has crossed a state border," Reddy added.

In TDP's defence, party spokesperson K Pattabhiram told ANI, "It was not planned. Chandrababu Naidu had himself made it clear to party cadres not to come and welcome him. But despite that, some of our party cadres came out on the roads to greet him. It was a spontaneous response from the cadre who had been missing their leader for the past two months due to the lockdown."

Stuck in Hyderabad due to the national lockdown, Naidu had previously tried to go to Visakhapatnam in the wake of the LG Polymers gas leakage mishap there last week. Now back in the state, he will participate in the two-day Mahanadu or annual party conclave on zoom app.

Naidu took the road route from Hyderabad to Amaravati after a last-minute postponement of operations at airports in the state.

He was finally granted the travel pass by the state government on Sunday. With flights set to resume on Monday, Naidu was supposed to fly to Visakhapatnam to meet the victims of the gas leak there and proceed hence to Amaravati. But a last-minute postponement of operations at Visakhapatnam and Vijayawada airports, to Tuesday, forced a change of plans.