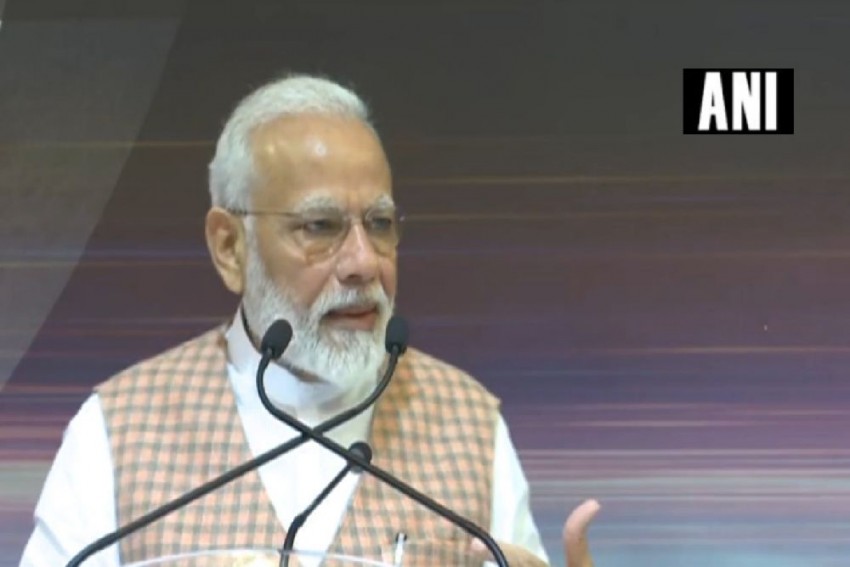 8:29 AM: PM Modi finishes his address to scientists and the nation with the chants of "Bharat Mata Ki Jai."

8:25 AM: "We don't have to look back. We have to move forward and not stop till we reach our destinations," says PM Modi. I wish you all the best for all the upcoming missions, says PM Modi.

8:20 AM: "I am with you, so is the entire nations," says PM Modi, "Every struggle teaches us something new. It encourages us to try and do something new".

8:18 AM: Resilience & tenacity are central to India’s ethos. In our glorious history, we have faced moments that may have slowed us but they have never crushed our spirit. We have bounced back again & gone on to do spectacular things. This is why our civilisation stands tall, says PM Modi.

8:15 AM: You came as close you could. "I salute the families of our scientists. Their silent but valuable support remains integral," says PM Modi. In our glorious history, we have faced tough moments but they could never crush our spirit, says PM Modi.

8:10 AM: I can understand what you are going through. I understand your state of mind, PM Modi tells scientists.

7:56 AM: ISRO’s achievement with getting Chandrayaan-2 so far has made every Indian proud. India stands with our committed and hard working scientists at @isro. My best wishes for future endeavours.

7:39 AM: Prime Minister Narendra Modi will address the nation at 8 AM on Saturday, in the backdrop of Chandrayaan-2's lander 'Vikram' losing contact with ground stations.

3:09 am: Data is still being analysed, Saturday's planned press conference has been called off,  announces ISRO

3:06am: "ISRO’s achievement with getting Chandrayaan-2 so far has made every Indian proud. India stands with our committed and hard working scientists at @isro. My best wishes for future endeavours," tweets Home Minister Amit Shah

2:54am: "We are with you  @isro. You have brought the nation, it’s young minds and all, together in sensing your achievements in Space. You will succeed," tweets Finance Minister Nirmala Sitharaman

2:52am: Media persons at ISRO headquarters asked to wait for another 15 mins

2:39am: "India is proud of our scientists! They’ve given their best and have always made India proud. These are moments to be courageous, and courageous we will be!" tweets PM Modi.

India is proud of our scientists! They’ve given their best and have always made India proud. These are moments to be courageous, and courageous we will be!

Chairman @isro gave updates on Chandrayaan-2. We remain hopeful and will continue working hard on our space programme.

2:22am: The country is proud of you. You have done great service to the nation and to the mankind. I am with you: PM Modi tells ISRO scientists

2:20am: 'Be courageous, it's not a small feat we have achieved,' PM Modi tells ISRO scientists

2:18am: Communication lost at 2.1km from touchdown, says ISRO chief

2:16am: Communication from lander Vikram was lost and data is being analysed, says ISRO chief K Sivan

Karnataka: Prime Minister Narendra Modi arrives at the #ISRO Centre in Bengaluru to watch the soft landing of Vikram lander on South Pole region of the moon. ISRO Chief K Sivan briefs him about the status of the mission. #Chandrayaan2 pic.twitter.com/RhrXbXRuLK

12:44am: While controlling its movement, the Mission Control Station of the ISRO will pass on instructions to Pragyaan to stop and determine the elemental composition of lunar rocks and soil using a payload called APXS on the front, right below the two cameras.

12:42am: A few hours after Chandrayaan-2's landing module Vikram touches down on the moon, Rover 'Pragyaan' will emerge from the lander and roll out onto the lunar surface.

12:12am: Less than an hour to go for the historic landing on moon

10:20pm: Prime Minister Narendra Modi has arrived at the Yelahanka Airbase to witness the planned landing of Chandrayaan-2's  'Vikram' module on lunar surface

Ever wondered about Pragyan’s different parts and how it functions? Watch the full video to find out!https://t.co/EuL6Gf72Jd#ISRO #Chandrayaan2 #Moonmission

8:52pm:  A group of 31 children in Patna, Bihar, on Friday performed a special prayer for Chandrayaan-2's soft landing on the surface of the moon. The children blew several conches in unison for the mission's successful landing.

5:10pm: A successful touch-down will make India the fourth country after Russia, the US and China to achieve a soft landing on the moon, and the first to launch a mission to the unexplored south polar region.

5:06pm: 'Vikram' will perform a series of complex braking manoeuvres to soft land in the South polar region of the Moon between two craters, Manzinus C and Simpelius N, on September 7.

5:05pm: Chandrayaan-2's 27-kg robotic vehicle 'Pragyan', which translates to 'wisdom' in Sanskrit, can travel up to 500 metres from the landing spot on the Moon and leverages solar energy for its functioning.

5:00pm: Did You Know? The 1,471-kg  lander 'Vikram', named after Dr Vikram A Sarabhai, father of the Indian space programme, is designed to execute a soft landing on the lunar surface, and to function for one lunar day, which is equivalent to about 14 earth days.

4:42pm: Hours before the soft landing, the ISRO came out with the Chandrayaan-2 chronicles indulging in 'banter' involving the orbiter, lander and rover 'Pragyan'.

We have the same wishes for Vikram, Orbiter.
Want to stay in touch with Vikram and Pragyan as they make their way to the untouched lunar South Pole and uncover its many mysteries? Then keep an eye out for the next edition of #CY2Chronicles! pic.twitter.com/2iA8W2lxtR

4:40pm: In a series of tweets, PM Modi said the mission manifests the best of Indian talent and spirit of tenacity. "The moment 130 crore Indians were enthusiastically waiting for is here! In a few hours from now, the final descent of Chandrayaan - 2 will take place on the Lunar South Pole. India, and the rest of the world will yet again see the exemplary prowess of our space scientists," he said.

I have been regularly and enthusiastically tracking all updates relating to Chandrayaan - 2 since it was launched on 22nd July 2019. This Mission manifests the best of Indian talent and spirit of tenacity. Its success will benefit crores of Indians.

I urge you all to watch the special moments of Chandrayaan - 2 descending on to the Lunar South Pole! Do share your photos on social media. I will re-tweet some of them too.

4:36pm: ISRO Chairman K Sivan said the proposed soft landing on the Moon was going to be a "terrifying" moment as the ISRO has not done it before, whereas Lunar Orbit Insertion (LOI) manoeuvre was successfully carried out during the Chandrayaan-1 mission.

4:34pm: 'Vikram' with rover 'Pragyaan' housed inside is scheduled for a powered-descent between 1 am and 2 am on September 7, followed by its touchdown between 1.30 am and 2.30 am.

If Attacked, India Will Give A Befitting Reply: Naidu's Veiled Warning To Pakistan