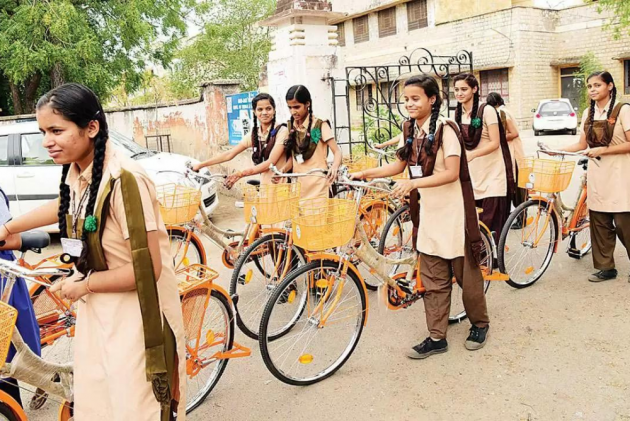 After four years, the Congress government led by Chief Minister Ashok Gehlot has once again issued an order to change the colour of school uniforms in government schools in the state.

The order says that the new uniform will be a combination of surf blue and dark grey.
Four years ago, Vasundhara Raje-led BJP government had introduced a new uniform for government schools comprising of a light brown shirt and brown trousers or shorts for boys and brown kurta with brown salwar or skirt for girls.

In 2017, the uniform change received a backlash with the then opposition Congress accusing the BJP of changing the dress code of students whose colour the party accused resembled with that of Rashtriya Swayamsevak Sangh (RSS).

Since the uniform was of brown colour, Congress had alleged that the colour of the dress was close to the dress code of the RSS.

The order issued on December 8, 2021, by the Rajasthan education department reads, "The dark grey coats and sweaters would be mandatory for winters. Whereas the surf blue and dark grey will be the new uniform colour, to be worn by students from the next academic session of 2022-23".

While the education department will provide free uniforms to students from class 8th to class 12th, those above class 8th will have to buy the uniform. As per the order, around 64,000 schools the new uniform will be introduced from the next session of 2022-2023. In the present session, students will be allowed to wear the existing uniform.

Why the frequent changes in the uniform?

The opposition BJP has criticised the Congress government for changing the uniform without any reason. "I don't see any reason for the Congress government to change the uniform. They only want to undo what the BJP government has done. The parents are already suffering during the Covid-19 and now this will be an unnecessary financial burden on them", BJP MLA and former education minister Vasudev Devnani told Outlook.

When asked about Congress' allegation of the existing uniform colour to be close to RSS, Devnani clarified, "We changed the uniform in 2017 because we thought to give a fresh look to schools and students after 20 years. What was there the need to change in just four years?”

Former education minister and state Congress chief Dotasara said the decision was taken on the basis of a six-member panel’s recommendation. “The committee considered complaints from parents and school teachers about the uniform introduced during the BJP government in 2017 and recommended a change,” he said.

The former state education minister Govind Singh Dotasara said, “The colour change of uniform was decided by a six-member committee after noting the complaints made by parents and school teachers about the uniform introduced during the BJP government in 2017".

The order has received a mixed reaction by parents as well as the educationists. "The colour of uniform should not be politicised. The frequent change of uniform will not only create a psychological impact on children but also is a burden on parents. The idea of the school uniform was to create uniformity and harmony but the frequent change of colours will not help", opined eminent educationist and social worker Ramesh Thanvi.

In Rajasthan, for almost 20 years between 1997 and 2017, the blue-and-khaki combination uniform dress code was for boys whereas the girls had a blue-and-white combination uniform. But when the colour combination changed to light and dark brown, the opposition Congress criticised the government and accused them of saffronising the uniform.