Charismatic, Bold And Erudite Ram Jethamalani Was Beacon Of Criminal Law In The Country

With Ram Jethmalani's demise, we have lost an eminent jurist, a great intellectual, a fearless human being and one of the most respected members of the Bar. 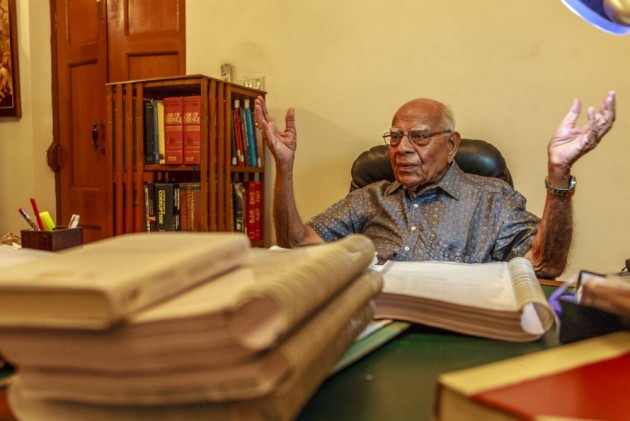 On September 21, 1994, my first day in the Supreme Court, I had an opportunity to meet Mr. Ram Jethmalani. As a wide-eyed young lawyer from a small town, it was a dream come true to have the "Doyen of Criminal Law" come and occupy the chair next to me, while I was sitting in Court No 8.

I mustered the courage and hesitatingly asked him to write something for me on a scrap of paper that I hurriedly fished out from my pocket. I told him that my father would be very happy when I go home and tell him that I met the Legend himself on my first day in Delhi. He immediately obliged and wrote the following lines: “There’s no substitute for hard toil and absolute integrity. You reach the top if you have these two”.

He went a step further and invited me to meet him at his house at Harish Chand Mathur Lane. When I went, he called up several senior lawyers like Mr. Rajeev Dhawan and Mr. Shanti Bhushan and recommended my name as a trainee lawyer. I was blown away by the fact that the top lawyer of the Country had gone out of his way to help me in making a smooth entry in the Supreme Court.

I went on to join Mr. KTS Tulsi, a senior advocate, then ASG, who was the only law officer proficient in criminal law during the time. Mr Jethamalani and our office would invariably be opposing each other in the courts almost on a daily basis. This gave me an opportunity to observe his court craftsmanship. He had the knack of making innovative arguments and interpreting the provisions of Criminal Law in a totally unique manner.

Those years of watching these two brilliant legal minds in action was a great learning experience for me.

The note that he wrote in 1994 became the guiding force for me in the years to follow. I pursued my professional career on these lines and developed my criminal law practice with "hard work and absolute integrity".

Later in my career, I got many opportunities to oppose him in the Courts again, while I was Standing Counsel CBI, in the High Court of Delhi between 2008-11.

I shared this note with him for the first time in the year 2011 while briefing him on a matter. He was surprised when I told him that I had laminated the note and kept it on my working desk all these years so that I would never lose sight of these guiding principles.

He was delighted to read what he had written nearly two decades ago. He told his Juniors and Interns who were present in the Conference, “Vikas is my real Student. Even though he never joined my Chamber, he has imbibed my teachings from a distance”.

For all of us, who have been practising on the Criminal side, Mr. Jethmalani has been the beacon of criminal law. He has left an indelible mark on our generation and his contribution towards the evolution of criminal law jurisprudence will continue to inspire the generations to come. He was a household name even when we were young, way before the advent of the all-pervading Electronic and Digital Media.

RJ was an exceptional lawyer -- charismatic, bold and erudite. There was nothing ordinary or run of the mill about his life. He had a genius for epigram. Brilliant, witty and skilled, he knew how to take the Court with him.

His presentation of cases in the courtroom was flawless. He never shied away from expressing his feelings at any platform whether legal, social or political. He had the courage to represent anyone who required his services, irrespective of the nature and magnitude of the charges alleged against them.

With Ram Jethmalani's demise, we have lost an eminent jurist, a great intellectual, a fearless human being and one of the most respected members of the Bar.

May his soul rest in eternal peace.

Vikas Pahwa is a senior advocate in the Supreme Court and Delhi High Court. He specialises in Criminal Law.