The heavy rainfall, aided by cyclonic circulation during monsoon, led to inundation of most areas in Chennai on Sunday and opening up of sluice gates of three city reservoirs to let out surplus water. 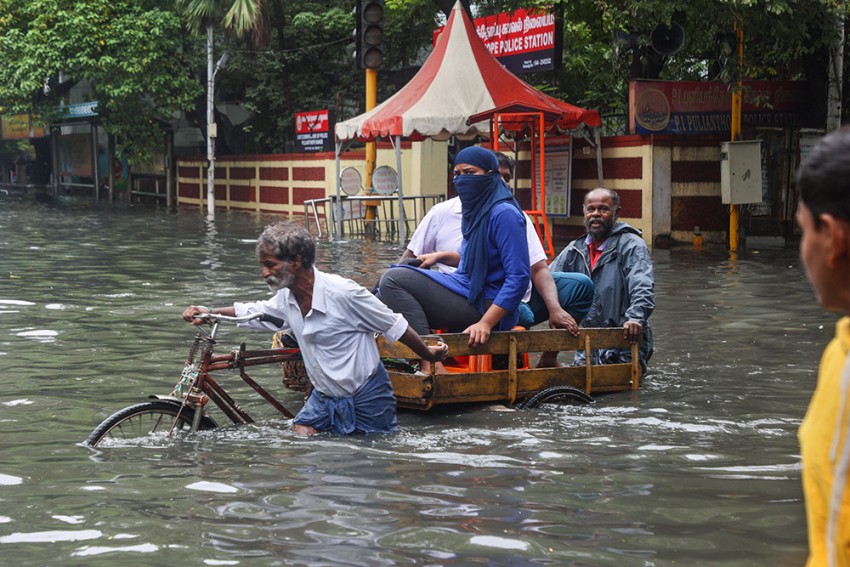 The heavy rainfall, aided by cyclonic circulation during monsoon, led to inundation of most areas in Chennai on Sunday and opening up of sluice gates of three city reservoirs to let out surplus water.

Since the start of the Northeast monsoon in October, Tamil Nadu and Puducherry regions have experienced about 43 per cent excess rainfall.

Heavy to very heavy rains lashing the city in about 24 hours comes after about six years, while other regions of Tamil Nadu received mild, and or moderate rainfall.

Prime Minister Narendra Modi tweeted, "Spoke to Tamil Nadu CM, Thiru @mkstalin and discussed the situation in the wake of heavy rainfall in parts of the state. Assured all possible support from the Centre in rescue and relief work. I pray for everyone's well-being and safety."

Spoke to Tamil Nadu CM, Thiru @mkstalin and discussed the situation in the wake of heavy rainfall in parts of the state. Assured all possible support from the Centre in rescue and relief work. I pray for everyone’s well-being and safety.

Stalin, along with cabinet colleagues distributed flood assistance, including rice, milk and blankets to people in affected areas, housed in a temporary shelters here. He directed officials to expedite rescue and relief work.


The government declared holiday for schools and colleges in Chennai, Tiruvallur, Kancheepuram and Chengalpet districts on November 8 and 9.

The Meteorological department said a cyclonic circulation lay over north coastal Tamil Nadu, southeast of Bay of Bengal and a low pressure area is likely to form by November 9 and the agency has forecast widespread rainfall for at least the next three days in the state.

From Saturday morning, Chennai and several suburbs in Kancheepuram and Tiruvallur districts witnessed intermittent rains and showers became non-stop since last night. Rains ceased in most areas here and in nearby districts by late Sunday night.

In view of heavy rains, vehicular traffic, bus and train services were affected here.
Though there was some delay in respect of a couple of flights, there was no major disruption in services, airport sources here said adding even passengers who arrived late due to showers were allowed to board.

Speaking on monsoon rains in the state, Revenue and Disaster Management Minister KKSSR Ramachandran said, "in 26 districts of TN, there has been widespread rainfall (during the season). Due to this, four persons were dead in rain related incidents and one was injured."
About 260 houses were damaged, he said adding 160 relief centres were opened in Chennai and over 50,451 food packets were distributed to people here by the government on Sunday.
Units of the state and national disaster response forces have been deployed wherever necessary including Chennai, he said.

Deputy Director General of Meteorology, S Balachandran said the all time record of highest rain here was 45 CM in 1976.

Following that in 1985, Chennai had recorded 25 CM and 33 CM rainfall on two different dates. Subsequently, in 2015, the city experienced 25 CM rainfall and now the city has recorded close to that level, he said.

Such showers over the past were recorded in November during the Northeast monsoon. "We have received 43 per cent more showers," he added.

The Kamarajar Salai point (DGP Office on the Marina beachfront) near the Tamil Nadu Secretariat recorded the highest of 23 CM and suburban Ennore in north Chennai, 10 cm.
Some suburban locations, including areas covered in nearby Tiruvallur district received between 3 CM (Poondi and RK Pet) and 9 CM (Cholavaram).

Surplus water from three reservoirs (Poondi, Chembarambakkam, and Puzhal that serve the drinking water needs of the city) was meanwhile released in a phased manner and an alert was sounded to people in advance.

Rainwater entered several houses in parts of neighbourhoods in the city and suburbs, including Saidapet, Velachery, Ambattur, Korattur and Vyasarpadi, bringing back memories of the deluge of 2015 in the city. People were evacuated in inflatable boats by disaster response teams from some of the locations.

Most city and peripheral roads came under sheets of water and several trees were uprooted, leading to traffic diversions and disruption in transport services. People waded through ankle deep water to reach nearby shops to buy essential commodities.
Relatively low level bridges, known as 'tharaipaalam' in Tamil, were submerged in several suburban areas.

In view of all round water logging, at least six subways were closed for traffic.
Ramachandran said rain water was pumped out from five city subways and work in respect of eight other similar facilities was on, adding 27 uprooted trees were removed. Rainfall ceased in several parts of Chennai and neighbouring districts by late Sunday though some areas continued to receive mild rainfall.

Mild to moderate, intermittent rainfall was also reported in other regions of Tamil Nadu, including Erode and delta areas like Tiruvarur.

With heavy rains in catchment areas of Cauvery river in Tamil Nadu and Karnataka, the water in Mettur Dam crossed 116 feet on Sunday as against the capacity of 120 feet.
Vellore district officials said waterbodies including tanks and lakes have reached their full capacities in view of monsoon rains and surplus water from Mordhana dam is being released as it touched its full level and the inflow continues in view of rains in neighbouring Andhra Pradesh.

"There is also a risk of flooding in Palar and Ponnayaru rivers," in Vellore district, they said and advised people to not go anywhere near the water bodies considering their safety.
The northeast monsoon (October-December) is the main rainy season for Tamil Nadu as nearly half of its annual rainfall is realised during this season.

In respect of districts including the neighbouring Kancheepuram, Chengelpet and Tiruvannamalai, authorities said key waterbodies including tanks were almost full.
Inspecting inundated localities here, Health Minister M Subramanian said, "the present scenario is not like what was witnessed in 2015 in Chennai. CM Stalin has directed officials to monitor water level in reservoirs and take necessary steps according to the situation. Civic personnel are on the job to tackle the situation."