MGR’s Legacy Cannot Belong To One Party: Kamal Haasan Lashes Out At AIADMK

Responding to the ruling party's claim that MGR's legacy belongs only to the AIADMK, Haasan said anyone who shares MGR’s ideal can claim to be his heir 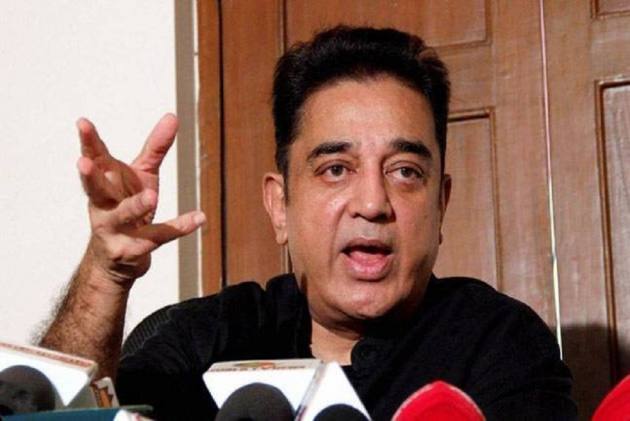 Makkal Needhi Maiam (MNM) founder Kamal Haasan on Sunday yet again lashed out at the ruling AIADMK over late Chief Minister M G Ramachandran's (MGR) legacy, saying anyone who adopts ideals like the stalwart can claim to be his "heir".

His party had ideals like him and therefore, "we are his extension," Haasan said at a poll rally, days after chief minister and AIADMK Co-coordinator K Palaniswami said no one other than the ruling party can lay claim to MGR's legacy.

Incidentally, the MNM's very slogan "Naalai Namadey" (Tomorrow belongs to us) has a connect to MGR, Haasan said in an obvious reference to a hit movie featuring the late matinee idol in the lead role, with a titular song from the same film being a hit number.

Assembly elections in Tamil Nadu are expected to be held in April-May 2021.

Hassan said questions were being asked if he was taking MGR's name with an eye on polls and said "it means you have not seen or heard anything."

"Our first slogan is Naalai Namadey. We are not the ones making money by repeatedly taking that name (of MGR). We are taking the name of (Mahatma) Gandhi as well as that of MGR, (EVR) Periyar and (BR) Ambedkar," he said at his campaign at Porur.

"We believe in all their good intentions becoming our intentions. We have that compassion of MGR who wanted poor students to come to school and have food (and so) we are his extension," Haasan added.

In fact, all those who think on the lines of MGR "are his heirs," he said.

"Therefore I am also that. You can't claim sole credit to MGR's legacy," Haasan asserted and accused the ruling party of having ''forgotten'' their late founder all these days.

"I have suddenly reminded them of MGR...this is childish behaviour (by the AIADMK). Why do you get angry if I say I am walking his path," he asked the ruling party.

Taking objection to Haasan claiming MGR's legacy, Palaniswami had a few days ago insisted that only the AIADMK, founded by the late Ramachandran, could lay claim to his legacy and wondered if the actor-politician "could christen the child of someone else."

He had accused the MNM chief of taking Ramachandran's name only for votes, saying "he (Hassan) does not have individual clout."

"AIADMK was founded by MGR, so it is the only movement qualified to use his name. No one else has the moral right to do so," he said.

Further, he had said on Friday that since both MGR and late chief minister J Jayalalithaa had no heirs, the party supporters and people were their heirs.