'What Is Pollution?' How Bad Air And Neglect Is Slowly Killing Our Children

High levels of air pollution can trigger asthma attacks in children and adversely affect those already inflicted with it. It can affect lung development. 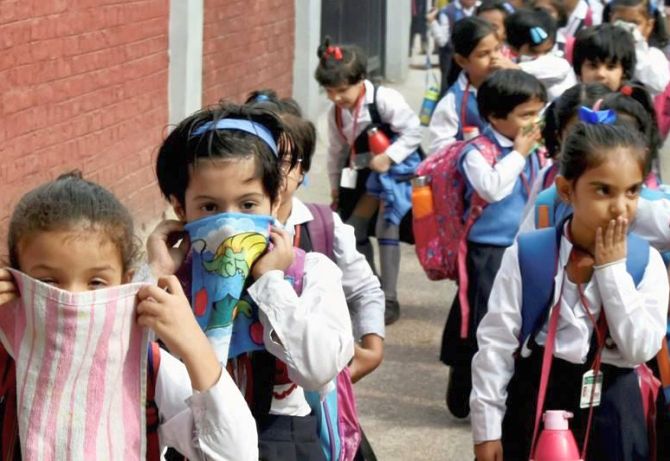 "Pollution kya hai?"  What is pollution? "Mujhe nahi paata. Pollution Corona Virus hota hai. Nahi Nasha hota hai (Pollution is coronavirus, pollution is addiction)”. These were the answers given by a group of little boys and girls living on the roads of Nizamuddin, one of the most crowded, busy and polluted neighbourhoods of Delhi.

Oblivious of how pollution was harming them or even what it was,  these children continue to live on the roads of Delhi with their faces covered in dirt and eyes blinded with smoke from passing vehicles. Not knowing what it is like to breathe fresh air, their nose is constantly running and their eyes watering.

These children have not gone to school for over four years. One of the brighter ones among the kids, 10-year-old Aryan Gonda, who has been living on the streets of Delhi for the past four years says, “Pollution is kala dhua (black smoke).” The road smells of smoke and there is litter all over the place. This is home to millions of kids in India, a place where they live, eat and play.

Aryan Gonda is from Nagpur. His family shifted to Delhi to sell clothes. Aryan says that clothes were cheaper in Nagpur. "We sell it at a higher rate here," he adds with a wink.

Aryan and his friends living on the roads of Delhi complain about chest pain and burning eyes. But they have no idea what's causing it. Happily giggling and playing, Aryan sometimes helps his parents sell clothes too. He eats, sleeps and breathes in the toxic air of Delhi.

Walking down the streets lined with an open-drain close to where the children's live and eat makes me wonder, how long can these young children survive this toxic environment?

The Delhi government's decision to close all schools during the cold winter months when the AQI level is high was seen by many as a move for the rich. But on the peripheries of the rich, the children of underprivileged families continue to struggle for basic healthcare and dignity.

What happens to the health of these kids? How long do they live? What is the condition of their lungs? Are they or their parents aware of the harmful effect of pollution?

Ananya, a thirteen-year-old girl and her mother, Vasundhara also lives on the streets of Delhi. Ananya has been living on the streets from the time she was born. Her mother works as a sanitary worker in the public toilets of Delhi. She too helps her mom in cleaning the mess around the place where they live. She complains about the pollution making her feel dizzy all the time. “I don’t remember when I last saw the clear blue sky. I am always down with cold and cough. But I guess I have learned to live with it.”

Pollution invites a plethora of health problems in children. There is no doubt that air pollution is dangerous for the lungs. Dr Tushar Parikh, Consultant Neonatologist and Paediatrician, Motherhood Hospital, Pune says, “Babies and children are vulnerable to air pollution as their lungs are still growing and not fully developed. Furthermore, it harms the normal growth of lung function in the womb, during childhood, and right up to even late teens. Children tend to breathe a lot of toxic air as they spend a lot of time outdoors.”

Experts say that children are more prone to respiratory infections because of pollution when compared to adults. High levels of air pollution can trigger asthma attacks in children and adversely affect those already inflicted with it. It can affect lung development.

A majority of children are also likely to suffer from Chronic Obstructive Pulmonary Disease (COPD), a chronic inflammatory lung disease that obstructs the airflow from the lungs. Symptoms include breathing difficulty, cough, mucus (sputum) production, and wheezing.

Manouvra Begum, a waste collector and a part of 'Safai Sena' who lives in a makeshift tent made of cardboard cartons and plastic covering from the top in Netaji Nagar with her children and grandchildren, says, “My day starts early in the morning around 7. We pick up trash from each and every house and then segregate it. My eight-month-old granddaughter also accompanies my daughter-in-law when segregating the trash".

Begum explains, “We have lived with pollution and these unhygienic living conditions for years. The moment I start talking I cough and there is so much pain in my chest. My children have also suffered because of pollution and by breathing rubbish. And now my grandchild who can’t even talk keeps rubbing her eyes and she is suffering from constant wheezing and cold. We are literally living on trash. Living on the roads, we breathe the smoke of vehicular pollution and there is so much construction work going on throughout the year. There is no escape for us from this bad air.”

“Segregation of rags happens here just next to my tent-house. And we have no place given by the government where we can sit and do the segregation. So, we are also exposed to it and so is my grandchild. There is no treatment facility given to us by the government and we can’t afford long stays in the hospital and wait till all our health parameters are normal. It will be great if city dwellers segregate the garbage into wet and dry bins in their homes. It makes our work easier and our children then don’t have to breathe this filthy air which is again just one source of pollution,” Begum adds.

Air pollution is the biggest environmental threat to human health. 12-year-old Mehak Arya from Delhi lives in a small room with her parents, two sisters and grandmother with hardly any sunlight coming into their houses. They have a sharing toilet.

She says, “Winter months, I have severe breathing problems. Now schools are closed, but otherwise, we have to walk down in the cold winter months to our school which is also not located in a clean area. Sometimes I feel better with steam, but there are days when I am hardly able to breathe properly and my mother has to rush me to the government clinics for nebulization. I am also having skin allergies on my back and chest and the doctor says that it is all because of pollution.”

Mehak’s school is located in the slums of Bapu Dham. When Mehak was asked if there was an air purifier in their school, she didn't know what it was. Her mother works as domestic help and her father is a daily wage earner.

Lalita Arya, Mehak’s mother says, “We are from Uttarakhand. The weather there is very pleasant and there is no pollution. But you cannot live on fresh air alone. So, we shifted to Delhi eight years back to get a job. Health issues are there, but what can we do? We have to feed so many stomachs and that’s not easy. So, we are learning to live with it.”

Harpreet Singh, a resident of Delhi who works as a media professional says, “Now schools are closed and my 11-year-old daughter is busy with online classes till 1 pm. I feel it is better because it saves my daughter from the morning pollution. But in the afternoon, she plays outdoors and probably because of that she is getting frequent coughs and colds. It happens more during winters when the pollution level is high, she falls ill frequently.” Singh’s daughter, Jagnoor Kaur says, “Last few days I am not allowed to step out because of smog.”

Moving away from Delhi to Mumbai to a multi-storey building, the air is no better. Priyanka Kar, mother of a 13-year-old Arav Kar, says, “We shifted to Mumbai when my son was 16-months-old. It was fine initially, but once he started going to school, he developed severe breathing problems. It was mainly because of dust pollution and since Mumbai is very humid, there are high chances of kids getting asthma.”

According to Kar's son’s paediatrician, 60 per cent kids who come to her in Mumbai either suffer from asthma or rhinitis and this is because of pollution. Kar says, “Initially we thought getting some purifier or medicines will help. But it doesn’t because pollen and dust are in the air and you just cannot escape this".

And how long can medicines help, Kar asks. "Because these are steroids and I don’t want him to continue giving it to him. In a month he has to be nebulized twice with steroids. Apart from breathing problems, he has developed some allergy which has impacted his eyes. Doctors have say this is allergic conjunctivitis, also caused by pollution and it happens during the summer months.”

Arav Kar is a soccer player and his parents thought he would build immunity if he continued playing and swimming. Exercise, however, only helps if one’s environment is clean. Now, Arav has to carry a nebulizer with him even when he is travelling.

In Mumbai, the main cause of pollution is mainly pollen and constant construction work that has increased in the last twenty years.

"We live next to the metro station and we have seen the metro station come up in front of our eyes. We keep our windows closed most of the time. The government needs to be cognizant about the fact that such prolonged construction work is impacting the city's kids," Arav's mother says.

Arav, in the meantime, complains of feeling lethargic, sleepy and has to miss school sometimes because of side effects from the steroids.

Steroids have repercussions. Every two months, Arav's mother has to do proper conditioning of the house. Kar adds, “I have thought of getting an air purifier, but I don’t know how effective it is. I have kept some indoor plants like snake plants which supposedly have the ability to remove toxic air pollutants. Sadly, that's all we can do!”