The official face of Asia's largest lagoon, the Fishing Cat grapples with an increasingly murky environment. The official face of Chilika, Asia’s largest lagoon is a cat. But it's not just any ordinary cat, it's a Fishing Cat.   If you spot one on the road after dusk, you could easily believe that it's a leopard standing in the middle of the path with its big round glowing eyes. With the help of moonlight, the blotches and stripes on its coat create the illusion of a tiger-like cat.  What also sets this wild cat apart is its habit of enjoying mud and water, quite a contrast to feline nature in general.

Those who have domestic cats would understand how strong their abhorrence is for water and surfaces that are wet. Yet don’t the stray ones just love to walk in and take the fish right out of our kitchen with the earnest and honest belief that it absolutely and utterly belongs to them?  As if humans were born to cater fish to cats, so that the latter would not have to  get wet and dirty.

But here is the Fishing Cat – a feline which has gone the extra length for the love of fish. So strong was its resolve to eat fish that nature cherry-picked traits to egg them on – the most important being the double-layered coat that prevents the skin underneath from getting wet.

Chilika’s envoy comes in at not such a flourishing time – the wetland kingdom it represents is drying up and shrinking. Mahanadi which brought in healthy quantities of freshwater and silt previously into the lagoon is unable to do so because of the Hirakud dam upstream. Yet the rapid urbanization and deforestation in its basin mean that there is lesser number of trees holding back the soil from being washed into the lagoon – the result, lesser water but more sediments are flowing into the lagoon, essentially clogging it. 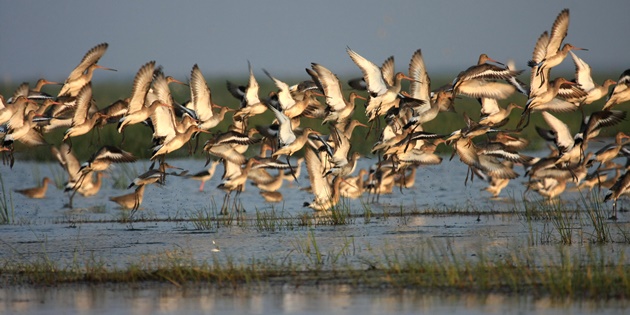 The visual imprints are being prominently felt at the north and northeastern sections of the lagoon, where the tributaries of Mahanadi pour in its bounty of water and silt. More sediment deposition here and less water to flush them out towards the sea mouth has resulted in the sector becoming shallow. Rama Behera, a seasoned son-of-the-waters, recollects memoirs of the watery depths that in the monsoon would create waves where today a bamboo pole would immerse four feet into the muddy water and get stuck.

Such was Rama’s love for the waters that when his father tied him up in a bid to punish him for evading school and asked him what is it that he wants – education or Chilika, there was no doubt in the boy’s mind as he shouted out – Chilika! His village in the northern fringes of the lake used to get generous quantities of prawn and a variety of fish – big and bountiful. Numerous water plants – both floating and emergents – decorated the water surface and provided food and breeding grounds for these fish. But the increasing sedimentation tipped the delicate balance and caused a succession in the aquatic plant world. Over two decades, in their place stood beds of Phragmites and Typha – tall wetland grass-like plants or reeds that thrive in shallow waters and hold back sediments, further making the waters shallower. 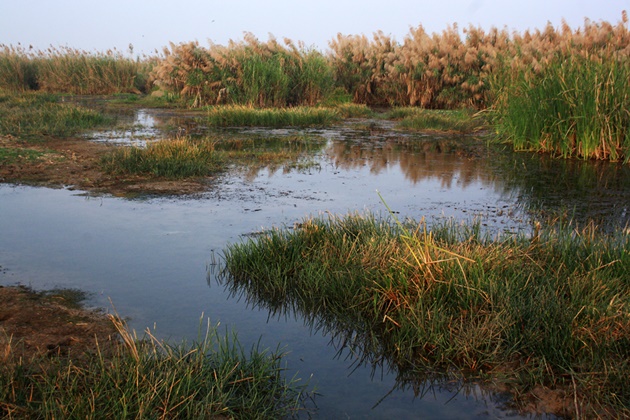 Dredging by the management is conducted to clean up the channels and maintain water flow. Simultaneously, the opening of the sea mouth and closing illegal prawn culture in Chilika has bettered the circulation of saltwater towards the northern sector which has prevented the further southward proliferation of the reeds. Incidentally, the coming up of reeds has facilitated Fishing Cats. And that is where it gets tricky. The same reeds that provide refuge and breeding ground for the cats are absolutely detested by fishermen and the management.

For some years now, management authorities had tried to manually uproot, chemically kill and burn off the reeds which were termed as a weed, but to no avail – the plants are too resilient. Gradually the recognition has dawned that from here on in, management has to adapt to the presence of reeds – that like it or not, the reeds are here to stay since they are only the symptoms that a tipping point in the system is being reached, by themselves they are not causing the problem. Babulai Behera has been seeing this decay since his childhood. Often when he is in the mood, he would retort – a Behera is no one’s slave but works according to the whims and fancies of his desire. This very artisanal fisherfolk spirit faces an existential crisis today as even Babu is forced to work as a migrant labourer sometimes. The fish catch in Chilika sometimes borders on erraticism. In the past, fishermen did not need to put out mosquito nets to catch fingerlings but now they do. Fingerling balls are a delicacy in the local markets. A proportion of fishermen indulge in what would empty the fish reserves further in the future.

So, in such murky waters stands Chilika’s new-found ambassador to ask what it would take to keep Chilika from reaching a state of eutrophication which would be a point of no return? What would it take to sustain the throbbing dynamicity that salt and freshwaters have mingled to create which in turn have created layers and layers of niches and homes for innumerable species? If Chilika cannot go back to its hey-days, can it at least not deteriorate further? Because not all is lost – hundreds and thousands of migratory birds still descend on Chilika creating a grand spectacle every winter – testimony to how rich the ecosystem still is for life. Otters and dolphins still frolic in the water, and the latter especially benefitted after Chilika Development Authority stepped in to stop illegal prawn culture. Two lakh fishermen families still worship Kalijai, the spirit and reigning deity of Chilika, keeping alive the culture knowledge of the lagoon that is unparalleled and not fully known. It is this thriving and living mega-community that the Fishing Cat represents. Solving their problems would require an integration of local and basin-level approach.  The cat awaits.