China, Pakistan's 'all-weather ally', stood alone in the Pakistani corner to get the Security Council to focus on the Kashmir issue. 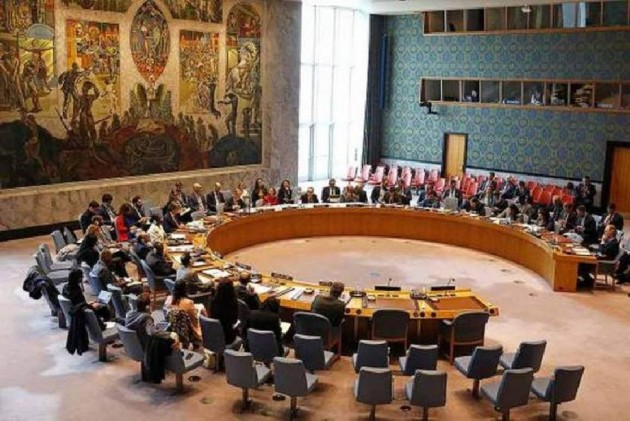 India on Wednesday slammed Pakistan for again trying to raise the Kashmir issue in the UN Security Council where it failed yet again to find any support, with New Delhi asserting that Islamabad needs to focus on the hard tasks it has to address in order to ensure normal relations with India.

China, Pakistan's 'all-weather ally', stood alone in the corner to get the Security Council to focus on the Kashmir issue.

The attempt failed as other member countries felt Kashmir is a bilateral matter between India and Pakistan.

Earlier on Wednesday, China made the fresh pitch to raise the Kashmir issue under "other matters" during closed consultations in the Security Council Consultations Room.

India's Permenent Representative to the UN Ambassador Syed Akbaruddin said: "We once again saw an effort made by one member state of the UN, fail in plain view of all others".

"We are glad that the effort was viewed as a distraction and it was pointed by many friends that bilateral mechanisms are available to raise and address issues that Pakistan may have in its ties with India," he said.

A European source, heading into the Security Council meeting, had described the discussions on Kashmir during the closed consultations to be "low key."

A top European diploamt said the issue should be resolved bilaterally and it was a "domestic affair."

Akbaruddin further said that "Pakistan's practice of using false pretenses to distract from addressing the malaise that afflicts it has run its course. We hope that Pakistan pays heed to the clear signals sent out here today and focusses on the hard tasks it has to address in order to ensure normal relations with India."

"The issue of India and Pakistan has always been on the agenda of the Security Council and today we have also seen some tensions, so the Security Council had a briefing and heard at the briefing from the Secretariat concerning the current situation on the ground. Members exchanged views on that".

Zhang later said China "has stated our position very clearly. We remain concern about the situation on the ground (in Kashmir)."

When asked if the meeting advanced anything, he said: " I am sure the meeting will be helping both parties to understand the risk of further escalation and will encourage them to approach to each other and to have dialogue and to seek means, to seek solutions through dialogue. I think that will be helpful".

The current move by China was the third such attempt since August when the special status granted to Jammu and Kashmir under Article 370 of the Constitution was scrapped by the government, and the state was bifurcated into two union territories.

In August, China pushed for a UNSC meeting on Kashmir after the government scrapped J-K's special status. However, the meeting did not yield desired results for China as the member-states maintained that India's move was an internal issue.

Last month, France, the US, the UK and Russia foiled an attempt by China to discuss Kashmir at a closed-door meeting of the UNSC.

China has been critical of India's reorganisation of J-K, and has particularly criticised New Delhi for making Ladakh a union territory. China lays claim over several parts of Ladakh.

India's decisions on Kashmir had also cast a shadow over Chinese President Xi Jinping's visit to India in October for the second informal summit with Prime Minister Narendra Modi.

Notwithstanding the acrimony over the issue between the two countries, Modi and Xi held "successful" talks in the ancient coastal town of Mamallapura, signalling a recalibration of bilateral ties.