Reports of the Chinese People’s Liberation Army (PLA) displaying their flag in Galwan Valley and building a bridge over the Pangong Lake in Ladakh caused concern in New Delhi today. 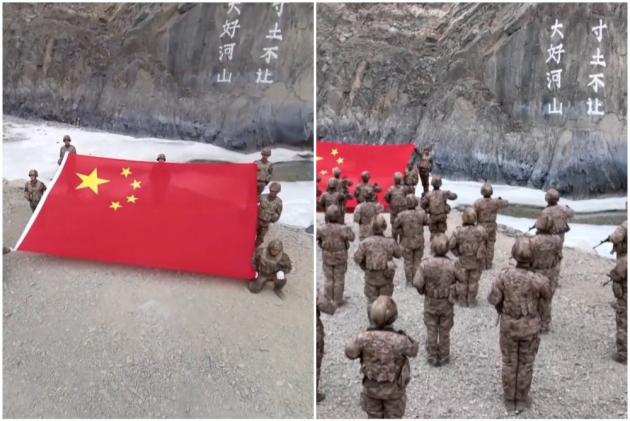 Alarm bells rang in New Delhi as reports of China’s People’s Liberation Army (PLA) building a bridge over the Pangong Lake in Ladakh began circulating this morning. Add to this that the PLA flew the Chinese flag in Galwan, the place where Indian and Chinese troops fought with bare hands, stones and pickaxes on the slopes of the mountain on June 15, 2020, leading to the death of 20 Indian soldiers and an undisclosed number of PLA troopers.

Indians are emotional about the Galwan deaths. The news that on Sunday, the first day of the new year, a Chinese flag flew atop these heights sent the rumour mills into high gear. Chinese social media users commented on the picture of the flag flying in Galwan with enthusiasm on Weibo, the Chinese micro-blogging site.

ðÂÂ¨ðÂÂ³China’s national flag rise over Galwan Valley on the New Year Day of 2022.

This national flag is very special since it once flew over Tiananmen Square in Beijing. pic.twitter.com/fBzN0I4mCi

India-China Ties In Deep Freeze, Only Modi And Xi Can Now Break The Deadlock

One user wrote, "China’s national flag rise over Galwan Valley on the New Year Day of 2022. This national flag is very special since it once flew over Tiananmen Square in Beijing.”

For the rest of the world, Tiananmen Square brings back memories of the brutal crushing of protestors by the Chinese Communist Party in 1989, one of the darkest days of China’s modern history. While the veracity of the reports could not be immediately confirmed, the rumours sent many in India into a tizzy.

Both the incidents are true. However, all this happened on the Chinese side of the Line of Actual Control (LAC) and not in Indian territory. China has every right to do what it pleases on its side of the Pangong lake or across the LAC in Galwan. So far neither the MEA nor the Defence ministry has reacted officially to this development.

Indian army sources assume that the prefabricated bridge is being built to ensure that India does not get access to the dominating heights it had captured in August 2020. The Indian army had taken the PLA by surprise by taking on the dominant positions. But during the disengagement process where both armies had to withdraw from the new positions, they occupied, Indian troops had to vacate the area. The Chinese also moved back to their side of the LAC in Galwan. Critics say that Galwan withdrawals were done without much fuss because India was occupying a better position in Pangong Lake.

The withdrawal from all points have not yet taken place and the last meeting between the field commanders of both sides achieved little, with both sides releasing separate statements on the talks. The silver lining is that the two army commanders said that another round of talks would take place at a mutually convenient date. That has not happened yet.

The peace has held so far but the situation remains tense with thousands of soldiers on either side gathered in positions where they can quickly move forward in case the situation takes a nasty turn.

While India cannot complain about what China does on its side of the LAC, these acts further vitiate the atmosphere between Asia’s two largest powers.