The Chinese side is understood to have conveyed to the Indian mission its keenness to have a meeting between the two defence ministers. 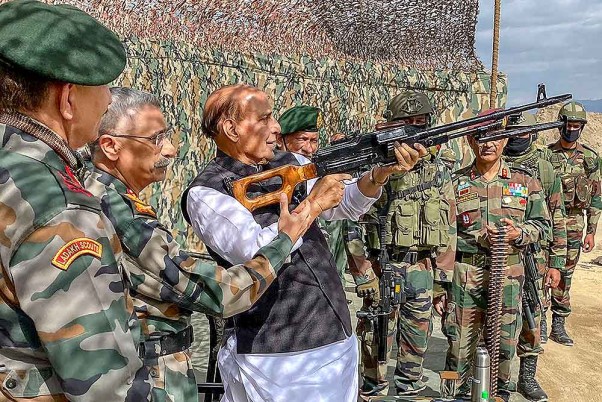 Chinese Defence Minister Wei Fenghi is understood to have sought a meeting with his Indian counterpart Rajnath Singh on the sidelines of a key Shanghai Cooperation Organization (SCO) meet in Moscow, people familiar with the development said on Thursday.

Indian and Chinese troops are engaged in a tense border row in eastern Ladakh for nearly four months now.

Singh and Wei are currently in Moscow to attend a meeting of SCO defence ministers on Friday.

According to information, the Chinese side conveyed to the Indian mission its keenness to have a meeting between the two defence ministers.

However, there is no official confirmation about it.

Tensions flared in eastern Ladakh after China unsuccessfully attempted to occupy Indian territory in the Southern Bank of Pangong lake four days back when the two sides were engaged in diplomatic and military talks to resolve the festering border row.

India occupied a number of strategic heights on the southern bank of Pangong lake and strengthened its presence in Finger 2 and Finger 3 areas in the region to thwart any Chinese actions. China has strongly objected to India's move.

India on Thursday said the border tension in Ladakh over the past four months is a "direct result" of Chinese actions aimed at effecting unilateral change in the status quo of the region, and asserted that the only way forward to resolve it was through negotiations.

The comments by the Ministry of External Affairs(MEA) that squarely put the blame on China for the prolonged border standoff came even as Chief of Defence Staff(CDS) Gen. Bipin Rawat asserted that India's armed forces are capable of handling aggressive Chinese actions in "best suitable ways".