Chinese troops carrying banners came along the LAC at Dalocamgo, Demchok, on July 6 and objected to Dalai Lama's birthday celebrations. 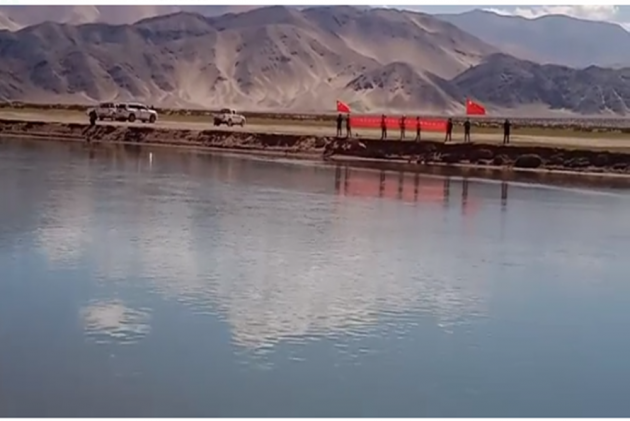 Chinese soldiers and some civilians came inside "Indian" territory and objected to the birthday celebrations of the Dalai Lama along the Line of Actual Control in the Demchok area of Ladakh.

Chinese troops carrying banners came along the LAC at Dalocamgo, Demchok, on July 6 and objected to celebrations. The PLA troops shouted at locals to stop celebrations. The locals, however, remained undeterred and celebrations continued throughout the day.

"The locals told me that PLA troops came along the LAC early morning in two to three vehicles. They were carrying banners too on which it was written that celebrations should be stopped. PLA troops also shouted at the locals and asked them to move back from LAC. However, due to the strong presence of the Indian army, locals stayed there and celebrations were completed, " Ishey Spalzang, Councilor Nyoma told Outlook over the phone.

Ishey said in the past too China had objected to these celebrations. The Councilor said the apparent reasons are China doesn't want any Indian activity along the LAC and it deliberately chose the day as a large gathering was expected.

"However, unlike in the past, this year the celebrations were muted affair due to COVID19 restrictions. Very few locals came along the river Indus for celebrations. The PLA troops had been consistently dissuading locals from carrying out any activity along the border, but it has deeply hurt the religious sentiments of locals," said Ishey .

On July 6, Prime Minister Narendra Modi had first time publicly stated that he had spoken to the Tibetan spiritual leader Dalai Lama on his birthday. The phone by the PM to the Tibetan spiritual leader came at a time when China has still not agreed to restore the status quo ante along LAC in eastern Ladakh. Beijing calls the Dalai Lama a “splittist”. India has in the past been very careful and calibrated in its engagement with the Dalai Lama.

Konchok Stanzin, Councilor Chushul constituency said off late China had started objecting to these and it's time the Indian government registers strong protest with China. " Celebrations were being held inside Indian territory. China has no business in objecting to it. His Holiness is revered not only by Buddhists but all. Even people along LAC in Chinese territory celebrate his HH's birthday. It has hurt the religious sentiment," said Konchok.

Locals say the area across the river Indus in Dolacamgo was also once "Indian territory" as per the local revenue record before it was "taken over" by China. About three-year back, the Chinese had objected to the same celebrations in the Demchok area, which even then were resisted by the locals. The Chinese had then asked the locals to move back some distance from the LAC for the celebrations, which was agreed by the locals, but celebrations had continued.