If 6400 vehicles crossing Rohtang Tunnel was an all-time record on Sunday at Manali, the past 24 hours surpassed the numbers to 7,276 creating another record for the world’s highest traffic tunnel. 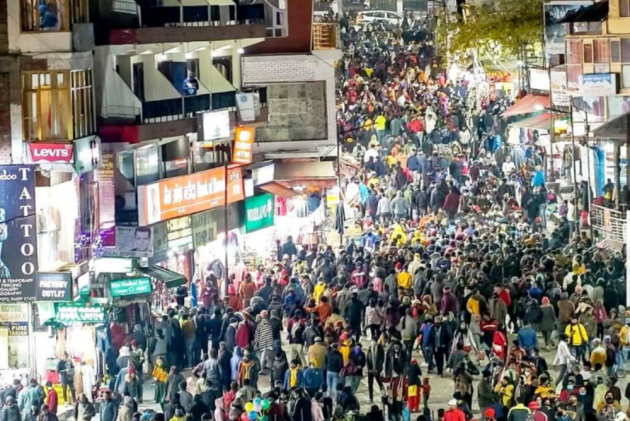 With hotels running with 100 percent occupancy on the weekend, many tourists had to spend the night in their vehicles as they did not find suitable rooms to stay in Shimla town on Sunday.

If 6400 vehicles crossing Rohtang Tunnel was an all-time record on Sunday at Manali, the past 24 hours surpassed the numbers to 7,276 creating another record for the world’s highest traffic tunnel.

Yet Another Record At Rohtang Tunnel, 6,400 Tourist Vehicles Pass Through On A Single Day

The data released by the Director-General of police Sanjay Kundu further substantiated the fact that Himachal Pradesh is the most visited state vis-à-vis tourists eager to take a break from the Covid lockdown, particularly after the deadly second wave .

“That is an average of about 18,370 vehicles entering the state for various tourist destinations and staying in the state's rural settings –the orchards and homestays, besides hotels also running packed” said Kundu.

That too has not been without chaos on the roads and markets. Pictures of the  Mall road at Manali went viral on Monday showing a heavy rush of tourists with not an inch of space left for pedestrian movement. Shimla was no exception.

Superintendent of Police Shimla Mohit Chawla said more than 11,000 vehicles entered Shimla town in the past three days— the weekend footfall after lifting of the restrictions against barely 1000 to 1200 vehicles a day earlier.

“This 2.5 fold increase has put the police under sudden pressure to maintain a seamless movement of the vehicles, and not allow haphazard parking on the roads to avoid traffic disruption. We have deployed additional manpower. Our Raftaar team including 16 bike riders is doing a yeoman service 24 X7 to deal with all traffic emergencies. We have positioned them at all vantage places from where they can move very quickly," Chawla said.

Traffic, however, is not the only issue. The tourists not adhering to Covid-appropriate behaviour on Mall road, Ridge or other popular spots and frequent arguments amid revellers has put the policemen on their toes.

The police have realised a fine of Rs 20,05 lakhs for mask violations already.

Ashwani Bamba, President of Dharamshala hotels and Restaurant Association said traffic chaos resulting from the sudden influx of tourists at McLeodganj and Dharamshala remains the biggest irritant. Nevertheless, the tourists are not complaining about it as they just want a decent room to stay.

“There is a three to four-hour hold–up of vehicles at Rohtang Tunnel and yet the tourists don't seem to be much bothered. Those getting a hotel room find themselves lucky,"  says Dr Shashi Kant, a professor at Himachal Pradesh University who hails from Kullu-Manali.

He adds, "Earlier during the peak Covid wave, people were struggling to get beds in hospitals . Now, they are clamouring for hotel rooms instead".

The sudden influx of tourists has put the civic infrastructure also under huge stress.

For the past two years, Shimla’s water demand is at an all-time high . Some localities are also even going without any drinking water. Due to Covid, there were no tourists and hotels remained shut. This resulted in a drop in the demand for water in the town to 32 -33 MLD. Now it's up to almost 43-44 MLD.

"We have a capacity to pump up to 48 or 49 MLD of water daily,"  Additional General Manager Shimla Jal Prabandhan Nigam (SJPN) told Outlook.

"If the demand grows any further, we will start lifting the water during peak hours between 6.30 pm to 10 pm," he added. The officer also clarified that the problem of shortage in some areas like Chotta Shimla was caused more by a technical glitch instead of a scarcity of water.