Police resorted to aerial firing at several places to disperse people protesting against the Citizenship Bill. 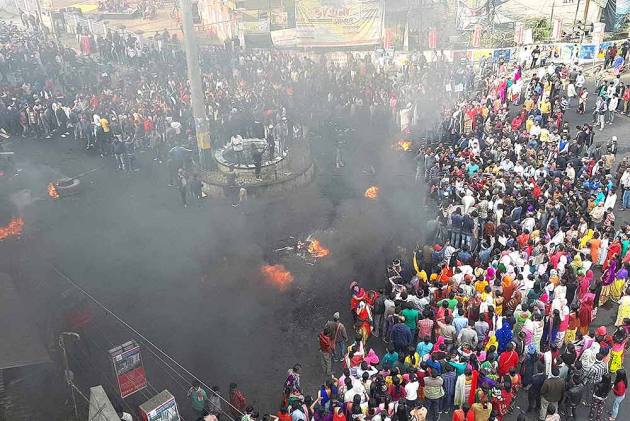 Two civilians were killed on Thursday in police firing during violent protests in Assam against the Citizenship (Amendment) Bill that was passed by both Houses in the Parliament.

One of the deceased, Dipanjan Das, succumbed to bullet injuries at Gauhati Medical College and Hospital. He was injured when police opened fire on the protesters to disperse them.

Despite the curfew imposed by the state government, thousands of people took to streets in Guwahati on Thursday to protest against the Bill that is soon going to become a law after the President gives his assent.

Opinion: Religion Cannot Be The Basis Of Citizenship In A Secular Nation

Protesters continued to clash with security forces, prompting them to open fire. Police said they had to open fire in Lalung Gaon area in Guwahati after stones were hurled by protestors. The agitators claimed that at least four persons were injured in the shooting.

Opinion | Assamese Are Angry, But Didn’t They Vote For CAB?

Police resorted to aerial firing in several other areas of the city, including the Guwahati-Shillong Road which turned into a war zone as protestors allegedly vandalised shops and buildings, burnt tyres and clashed with security forces.

The army conducted flag march in Assam on Thursday as thousands of protesters opposing the Citizenship (Amendment) Bill (CAB) took to streets and defied curfew, clashing with policemen and plunging the state into chaos.

Five columns, each consisting of 70 soldiers and one or two officers, were deployed in Assam, while three columns have been deployed in Tripura.

The Meghalaya government on Thursday withdrew mobile Internet and messaging services across the state for the next 48 hours due to deteriorating law and order situation triggered by protests over contentious Citizenship (Amendment) Bill, officials said.

The services have been withdrawn since 5 pm Thursday. The district administration in the state capital has also clamped curfew in areas under two police stations in view of the "serious" deterioration of law and order. The curfew will come into effect from 10 pm tonight till further orders, they said.

Opinion | Citizenship Amendment Bill: A Noose Around Necks Of Muslims

"Curfew is on till further orders. We are monitoring the situation very closely. So far the situation is under control," Assam Police Additional Director General (Law and Order) Mukesh Agrawal told news agency PTI.

Protesters set fire to the house of MLA Binod Hazarika in Chabua and went on a rampage torching vehicles and the circle office. On Wednesday night, curfew was imposed in Dibrugarh for an indefinite period as protesters targeted the houses of Assam Chief Minister Sarbananda Sonowal and Union minister Rameswar Teli in the district.

Keeping in view the prevailing situation, the authorities extended the suspension of internet services across the state for another 48 hours from 12 noon on Thursday.

Opinion: CAB Not Based On Religious Intolerance, Has Nothing To Do With India’s Muslims

Railways suspended all passenger train services in Tripura and Assam and short-terminated long-distance trains to the region to Guwahati. After a railway station in Dibrugarh's Chabua, the hometown of the Assam chief minister, was set on fire by protesters late Wednesday night and the Panitola railway station in Tinsukia district torched, 12 companies of the Railway Protection Special Force (RPSF) have been dispatched to the region, DG of RPF Arun Kumar told news agency PTI.

Hundreds of passengers remained stranded at the Guwahati airport due to indefinite curfew in the city.

Opinion | Assam Model Of ‘Harassment’ Will Be Replicated Across India

From students to working professionals and old men to young women, people were seen squatting inside or outside of the Lokpriya Gopinath Bordoloi International airport at Borjhar area, about 30 km from the main city.

Meanwhile, the Information and Broadcasting (I&B) Ministry has directed all private TV channels to be cautious in airing content which is likely to encourage or incite violence.

In an advisory to TV channels issued on Wednesday, the I&B Ministry said that "It is reiterated that all TV channels are advised to be particularly cautious with regard to any content which is likely to encourage or incite violence or contains anything against maintenance of law and order or which promotes anti-national attitudes".

In a major reshuffle, the Assam government on Thursday replaced the Guwahati Police commissioner and a senior officer responsible for law and order in the state, amid violent protests against the Citizenship (Amendment) Bill, officials said.

Prime Minister Narendra Modi assured the people of Assam that they need not worry about the draft law. PM Modi tweeted saying, "I want to assure my brothers and sisters of Assam that they have nothing to worry after the passing of #CAB. I want to assure them- no one can take away your rights, unique identity and beautiful culture. It will continue to flourish and grow."

Chief Minister Sarbananda Sonowal, who was stuck for more than an hour at Guwahati airport amid protests on Wednesday, appealed the people to maintain peace and urged them not to get "misled" by the Bill.

Meanwhile, Bangladesh Foreign Minister A K Abdul Momen and Home Minister cancelled their visit to India amid protests over the CAB. The External Affairs Ministry said the decision was not linked to the Citizenship (Amendment) Bill.

The Bill seeks to amend the Citizenship Act of 1955 to allow non-Muslim refugees from Bangladesh, Pakistan and Afghanistan to become Indian citizens if they leave their country facing religious persecution.

Opposition parties such as the Congress, AAP and TMC on Thursday raised the issue of protests and violence in Northeast in the Lok Sabha.