The administration lifted curfew and restored the broadband internet services in Guwahati as the situation improved in Assam. 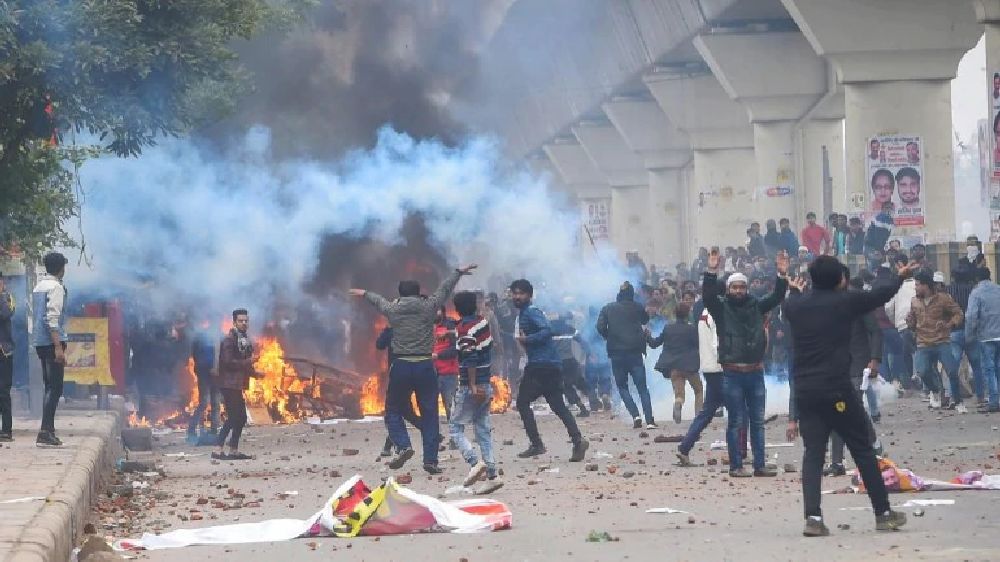 Protests against the Citizenship Act continued in several parts of India even as Prime Minister Narendra Modi asserted that the new law neither takes away the rights of Indian citizens nor harms them in any manner.

While curfew was lifted on Tuesday in Assam after nearly a week, violent protests against the new law erupted in national capital's Seelampur. The protests spread to other parts of the country and several universities staged protests in solidarity with students of Jamia Millia and Aligarh Muslim University.

In Kashmir, students of Islamia College, Srinagar, also staged a protest against police crackdown on students of Jamia and AMU.

Will Take Back Illegal Bangladeshis If Evidence Is Provided: Sheikh Hasina's Advisor

Students From 19 US Universities, Including Harvard, Extend Solidarity To Jamia, AMU After 'Police Violence'

Angry protesters demanding the scrapping of the amended citizenship law torched several motor-bikes, pelted stones at police personnel and damaged buses and a police booth in Northeast Delhi's Seelampur area on Tuesday afternoon, in fresh violence in the national capital.

Police resorted to baton charge and fired tear gas shells to disperse the protesters. Plumes of smoke billowed from at least two localities as the standoff continued for around one-and-a-half hours. Police said the situation has been brought under control.

They said two bikes of traffic cops were burnt by the demonstrators, adding a police booth in the area was vandalised and CCTV cameras installed there were taken away by the mob.

Some security personnel were also injured in the incident, police said. Gates of seven metro stations were closed in the wake of the protest, and five of them were reopened after some time. Traffic was also diverted from the area.

In Jamia,  thousands of people, braving freezing cold, poured onto streets for a peaceful protest. Holding Tricolour and placards, they raised slogans like "Azaadi (freedom) from atrocities" and formed human chains, while some women-led groups took out marches in the narrow lanes of nearby residential areas. Schoolchildren held out placards reading "we want justice" as their buses drove through the area.

Anil Mittal, ACP North West and additional PRO, told Outlook that those arrested "had criminal backgrounds", adding none of them was a student of Jamia Millia Islamia.

Meanwhile, the Supreme Court said high courts should be approached first on pleas alleging police atrocities on persons protesting against the amended Citizenship Act. The top court also asked as to how buses were burnt during the protests on December 15 near Jamia Nagar in the national capital. "

We don't want to spend time knowing facts, you should go to courts below first," said the bench, headed by Chief Justice S A Bobde.

"We have disclosed our minds, High Courts should be approached for the fact-finding exercise, said the top court.

Protests Spread To Other Campuses

Students of different universities in Hyderabad staged a sit-in at their campuses, protesting against the Citizenship Amendment Act and police action on their counterparts in Jamia Millia University in Delhi.

Students from Osmania University and other educational institutions squatted in front of the Arts College on the OA campus and raised slogans against the BJP government and Delhi Police like "We want Justice", "Want Democracy, Not Dictatorship", among others. They also took out a rally inside the campus, holding placards that read "CAB is anti-Constitution" and "We Stand with AMU and Jamia".

A section of the students of the Madras University continued their protest for the second day on Tuesday against the amendment to the Citizenship Act by staying put inside the Marina campus here, as police entered the premises.

The protesters sat on the sprawling campus, which is just opposite the Marina beach, seeking withdrawal of the amendment and raised slogans against the amendment to the
Citizenship Act.

As fresh clashes erupted in Delhi and elsewhere, leaders of opposition parties knocked on the doors of President Ram Nath Kovind urging him to advise the Centre to withdraw the "unconstitutional and divisive" citizenship amendment law.

Congress president Sonia Gandhi, who led the opposition delegation, alleged the Modi government was "shutting down" people's voices and bringing legislations which are not acceptable to them.

But an unfazed Amit Shah asserted there was no question of going back on its implementation and accused the opposition of engaging in a "false" campaign over the legislation.

Shah accused the opposition of running a "false" campaign and creating a rift between Hindus and Muslims over the Citizenship Act.

In the backdrop of the violence, Shah said he has directed the Delhi Police to maintain law and order and to ensure peace in the national capital.

Delhi Police Commissioner Amulya Patnaik briefed Union Home Secretary Ajay Kumar Bhalla and other senior officials of the ministry on the violence at Jamia Milia University and Seelampur during anti-CAA protests and the prevailing situation in the national capital, officials said.

The home ministry officials are said to have expressed their unhappiness over the two incidents happening within just three days, an official said, adding they asked the Delhi Police brass to strengthen intelligence gathering mechanism so that such incidents do not occur in future.