A video shared by news agency ANI showed workers and police on opposite sides and the latter firing tear gas shells on migrants. 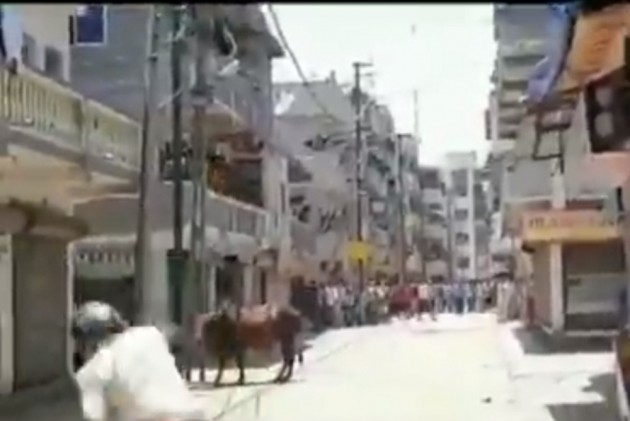 Hundreds of migrant workers, who want to return home in their native states, and police clashed on Monday in Gujarat's Surat, an official said.

The workers hurled stones at police, forcing the Surat district police to react with lathicharge and firing of tear gas shells, PTI reported.

"We did not get our salary since March. We don't have money left," a worker said.

A video shared by news agency ANI showed workers and police on opposite sides and the latter firing tear gas shells on migrants.

The Ministry of Home Affairs (MHA) has allowed the movement of migrant workers, tourists, students and other persons stranded at different places due to lockdown, by special trains.

#WATCH Gujarat: A clash erupts between migrant workers & police in Surat. The workers are demanding that they be sent back to their native places. pic.twitter.com/aiMvjHGukY

Gujarat has been one of the worst-hit states due to COVID-19 in India and Surat has reported 30 deaths until now. On Sunday, the state reported 374new COVID-19 cases and the highest single-day deaths at 28, with Ahmedabad alone accounting for 23, taking the overall number of the affected people to 5,428 and fatalities to 290, a Health department official said.

This is the fourth time in the last one month when migrant workers have come out in large numbers and demanded they be allowed to return to their native states.

In the last protest, held outside the offices of the Diamond Bourse in Surat on April 28, hundreds protested saying they were made to work amid the coronavirus pandemic and lockdown.