Did Climate Change Lead To Uttarakhand Flood? Here’s What Scientists Have To Say 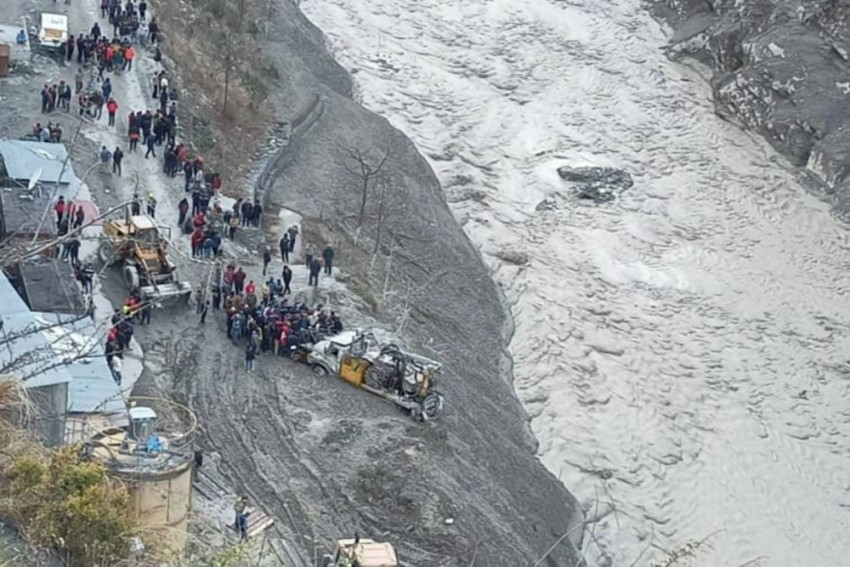 Global warming or the western disturbances bringing freshly melted snow could have triggered the inundation in Uttarakhand's Chamoli district, said experts as they contemplated the reason behind the recent flash floods and avalanche in the upper reaches of the Himalayas.

Although the Snow and Avalanche Study Establishment (SASE) of the Defence Research and Development Organisation are looking for reasons that caused the catastrophe which took place in Uttarakhand, they still cannot think of a reason why a glacier could have melted in the winter.

Recalling the horrors of the 2013 deluge in the hill state in which thousands were killed, a part of the Nanda Devi glacier “broke off” at Joshimath on Sunday, leading to a massive flood in the Alaknanda river system. Till late afternoon Monday, 18 bodies had been recovered and 202 were missing.

Why Did Chamoli Glacier Burst Occur? Here’s What Environment Experts Have To Say

It is not clear whether the flood is a typical Glacial Lake Outburst Flood (GLOF) or some temporary damming due to a landslide and avalanche that might have blocked the mainstream to form a temporary lake which burst, said Ranjit Rath, director-general of the Geological Survey of India (GSI).

A GLOF is a type of outburst flood that occurs when the dam containing a glacial lake fails.
“Once the water level recedes a team of experts will assess the damage as well as the triggering factor responsible for the outburst,” Rath told reporters here.

As the nightmare envisaged by numerous environmentalists warning against untrammelled development in the mountains came true on Sunday, glaciologist Farooq Azam said a glacial burst is very rare.

"We have been trying to understand the event since yesterday. Right now what we can tell is a glacier slipped from around 500-600 metres, which started a landslide with an icefall that triggered this disaster," Azam, assistant professor, Glaciology & Hydrology, Indian Institute of Technology (IIT), Indore, told PTI.

"For sure there was no glacial lake outburst flood, for sure there is no cloud burst because there is no lake available in the region at this particular time. Even if there are lakes, they are frozen and they don’t have any activity. The disaster happened because of an icefall and landslide." he added.

Satellite and Google Earth images, Azam added, do not show a glacial lake near the region, but there's a possibility there may be a water pocket in the region.

“Water pockets are lakes inside the glaciers, which may have erupted leading to this event,” Azam told PTI.

The scientist, however, said further analysis, weather reports and data are needed to confirm if this indeed was the case.

“There is no doubt that global warming has resulted in the warming of the region. Climate change-driven erratic weather patterns like increased snowfall and rainfall, warmer winters have led to the melting point of a lot of snow,” he added.

Climate scientist Roxy Mathew Koll agreed and also said more data is needed.
He said the recent climate change assessment report for India shows significant melting and decline in glacier mass over the Himalayan region in the recent decades due to warmer temperatures.

Koll also said it was not clear if an accumulation of glacier melt led to this burst, and noted that Western disturbances during last week did bring in a lot of snow over the region, followed by the clear sky and warm temperatures.

“It is quite possible that climate change and melting of fresh snow led to piling up of water in this area,” Koll, the Indian Institute of Tropical Meteorology (IITM) in Pune, told PTI.

“Natural reservoirs of ice glaciers are created in the top Himalayan region due to hill boundaries. Due to climate change, when temperatures rise, ice melts and turns into a water reservoir,” Srivastava, who specialises in Geotech engineering, explained.

High water pressure breaks the barrier and creates flood-like situations, he said, adding that scientists have been predicting this for a very long time but it is happening now.

Pointing out that there is not enough data to give information on what caused the avalanche and floods, Anjal Prakash, adjunct associate professor at the Indian School of Business (ISB), Hyderabad  said, “What we know, prima-facia, is that this looks very much like a climate change event as the glaciers are melting due to global warming.”

According to him, the Intergovernmental Panel on Climate Change (IPCC)’s Special Report on Oceans and Cryosphere in a Changing Climate (SROCC) shows that climate change has altered the frequency and magnitude of natural hazards.

“The scientists reported with medium confidence that in some regions snow avalanches involving wet snow have increased while the rain on snow floods have also increased at lower elevations in springs,” Prakash, lead author of the ongoing 6th Assessment report of IPCC, said in a statement.

The impact of global warming on glacial retreat is well documented, he said. The IPCC report shows that temperatures are rising in the Hindu-Kush Himalayan region and the rise in global temperature will have more impact in the Himalayan region due to elevation-dependent warming, Prakash added.

He urged the government to spend more resources in monitoring the region better so there is more information about the change, adding this could help develop better adaptation practices.

The glaciers in the Himalayas are retreating under a climate change scenario, which is a global phenomenon, Rath said.

"With the passage of time, some of the glacial lakes near the terminus often coalesce together and form large glacial lakes dammed by glacial moraines. The constitution of the moraines comprising loose boulders, gravels, sand admixture often containing dead ice, imparts inherent weakness to these dams,” Rath said.

"These lakes are quite common on the debris-covered Himalayan glaciers wherein the lower part of the glacier moves very slowly and at times remains almost stationary. The breach glacial and outbursts, termed as GLOF, can result in the discharge of a huge volume of water leading to severe damage in the areas falling in the downstream region," he added.