Cloudburst Explainer: Why It Occurs Mostly In Hilly Areas Which Makes It Difficult To Predict, Know It From Experts

Mahesh Palawat, Vice President (Meteorology and Climate Change) with Skymet Weather, said such clouds are called cumulonimbus and can stretch to even 13-14 kilometers in height. 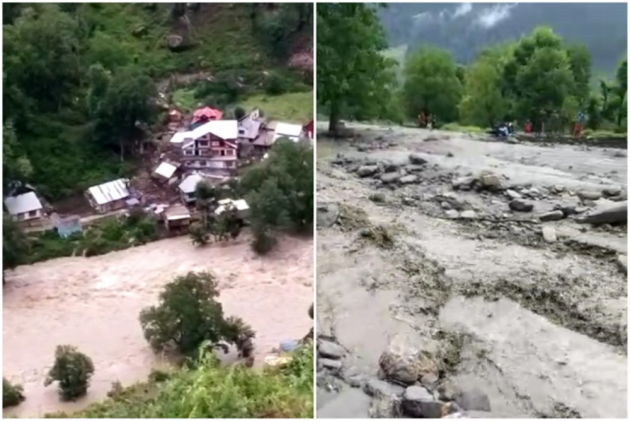 Days after Himachal Pradesh and Union Territories of Jammu and Kashmir, and Ladakh were hit by cloudbursts, experts have predicted that this disaster is mostly a localised event and occurs in the hilly areas. India Meteorological Department (IMD) Director General Mrutunjay Mohapatra said cloudburst is a very small-scale event and mostly occurs over hilly areas in the Himalayas or in the western ghats.

He said when warm monsoon winds interact with cold winds it leads for formation of huge clouds, which is also due to the topography or orographic factors.

If 10 centimetres rainfall is received at a station in one hour, the rain event is termed as cloudburst. This sudden discharge of large amount of water not only leads to human casualties but also loss of property.

After Kishtwar And Manali, Cloudburst Near J&K’s Amarnath Cave Shrine

Mahesh Palawat, Vice President (Meteorology and Climate Change) with Skymet Weather, said such clouds are called cumulonimbus and can stretch to even 13-14 kilometers in height.

If they are trapped over a region or there is a no air movement for them to disperse, they discharge over a specific area.

According to an explainer by the IMD on its website, "It is very difficult to predict cloudbursts due to its very small scale in space and time. To monitor or nowcast (forecasting few hours lead time) the cloudburst, we need to have dense radar network over the cloudburst-prone areas or one need to have a very high-resolution weather forecasting models to resolve the scale of cloudburst."

"Cloudbursts do occur at plains, however, mountainous regions are more prone to cloud bursts due to orography."

This month, cloudburst events were recorded in Jammu and Kashmir, Ladakh, Uttarakhand and Himachal Pradesh ---- all hilly areas.

Mohapatra said, "Cloudbursts cannot be predicted. But we do give alerts of very heavy rainfall. Incase of Himachal Pradesh, we had given a red (colour-coded alert)."

M Rajeevan, Secretary, Ministry of Earth Sciences, said the incidents of cloudburst seem to be rising.

Although, it is difficult to forecast cloudbursts, doppler radars can be very helpful in predicting them. Nowcasts can be given three hours prior to the event, he pointed out.

But not every place may have a radar, especially the Himalayan region.

According to a written response by Earth Sciences minister, Jitendra Singh in Lok Sabha on July 23, the Himalayan region has seven doppler radars --- two in Jammu and Kashmir (Sonmarg and Srinagar), one each in Uttarakhand (Kufri), Mukteshwar (Uttarakhand), Mohanbari (Assam), Meghalaya (Sohri) and Tripura (Agartala).

Singh said two sites for installation of two Doppler Weather Radars (DWR) in Himachal Pradesh have been identified for which no objection certificate (NOC) is awaited from the state government. Completion of the project for installation of DWRs is expected by December 2022.

Senior meteorologist Kamaljit Ray, currently posted at the Ministry of Earth Sciences, said many cloudburst events also go unnoticed as not every place where the event occurs may have Automatic Weather Station to record the rainfall, especially the hilly areas. More importantly, the duration of the event is very short.

Ray, who co-authored a paper along with Rajeevan and other meteorologists on deaths due extreme weather events from 1971-2019, said cloudbursts are also not normal weather events as it leads to loss of lives and damage to the property.