Committed To Defending People Under Attack By PM Narendra Modi, His Policies: Rahul Gandhi In Wayanad

Rahul Gandhi, who had offered to resign from the Congress chief's post which was rejected by the Congress Working Committee, however, made no reference to the crisis in the party 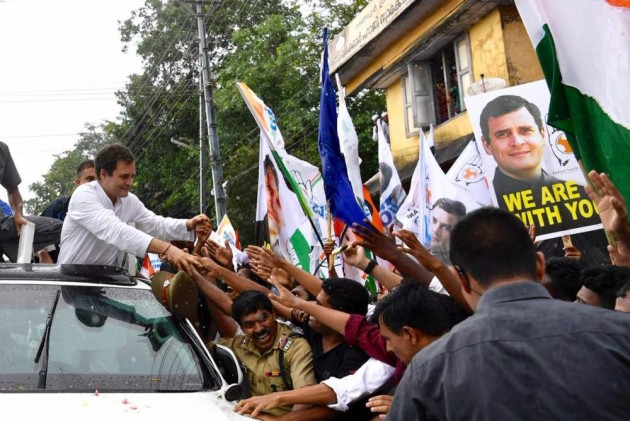 Congress President Rahul Gandhi, in his first public appearance after a severe defeat at the hands of the BJP in the Lok Sabha elections, on Friday once again repeated his commitment to guarding the people under attack from Prime Minister Narendra Modi's policies and the PM himself.

"The current government and Mr Narendra Modi spread hatred in the country and the Congress party knows and understands that the only way to combat hatred is through love and affection," he said while addressing people in Nilambur on the first day of his three-day thanksgiving visit to his parliamentary constituency Wayanad in Kerala.

"We are with you," read one of the several flags fluttering in the street. Despite heavy rains, the people thronged the streets as their new MP, who is on a three-day thanksgiving visit, waived and blew kisses to them.

Gandhi, who had offered to resign from the Congress chief's post which was rejected by the Congress Working Committee, however, made no reference to the crisis in the party and showed no signs of whether or not he was going to continue to be the president.

"We're committed to defending space of opposition, defending weak people in this country, defending people who are under attack by Mr Modi's policies and Mr Modi himself. I look forward to representing you and working with you to build a better Wayanad," he said.

Gandhi, who is here to express gratitude to people after the poll win, said that he will represent the difficulties of the people of Wayanad in Parliament.

"I am MP from Congress party but also I am a Member of Parliament (MP) from the UDF and more importantly I am an MP who represents Wayanad and people of Kerala in Lok Sabha. I am going to spend my time listening to the people of Wayanad. I will represent your need and difficulties in Parliament," he said.

"I look forward to representing you and working with you to build a better Wayanad," the Congress president said.

During his visit, Gandhi will hold road shows in all Assembly constituencies under Wayanad Lok Sabha seat to thank people for electing him as their parliamentarian.

"I will be in Wayanad, Kerala starting this afternoon and till Sunday to meet citizens and Congress Party workers. It's a packed schedule with over 15 public receptions planned over the next 3 days," Gandhi had earlier tweeted.

Gandhi, who netted 7,05,034 votes in Wayanad, won by 4,31,063 votes against his nearest rival PP Suneer of Left Democratic Front (LDF) in the constituency.

This is the first official public address of the Congress president after Union Minister Smriti Irani wrested his family bastion of Amethi in Uttar Pradesh. In Kerala, Congress-led United Democratic Front (UDF) bagged 19 out of the 20 seats.