HD Deve Gowda remembered AB Vajpapayee, with whom he differed on many issues, with fondness and recalls a time when Vajpayee offered support to Gowda when the latter was heading a coalition government at the centre. 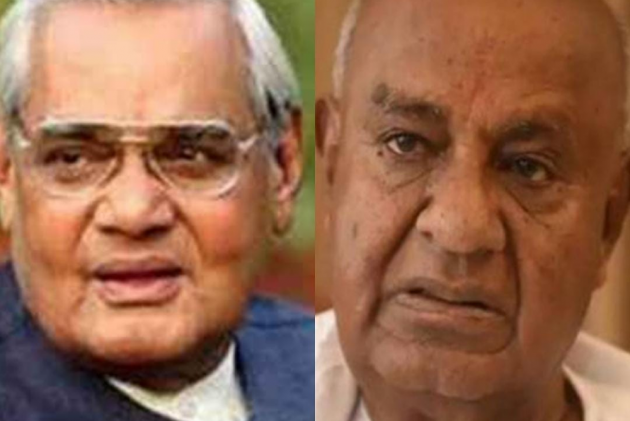 When Gowda as prime minister had lost the support of the Congress party in April 1997, and his own party men and coalition partners were dithering, Vajpayee offered to save his government.

Even when the confidence debate was on in the Parliament, he sent a chit to Gowda and reiterated what he had told him in confidence earlier. There were also others like Balasaheb Thackeray, Sahib Singh Verma, George Fernandes and Ram Jethmalani, who urged him not to resign but instead accept BJP’s support and continue as prime minister. However, it was Vajpayee who personally tried to work on Gowda.

‘It may have been a strategic move on the part of Vajpayee to save my government, but I also could feel his sincerity,’ Gowda recalled. Gowda never forgot this gesture of Vajpayee. Their interpersonal relationship remained cordial at all times, but that did not stop him from countering and cornering Vajpayee on issues of public, communal and constitutional importance.

He had made a tangential mention in the Parliament of this Vajpayee offer twice, but ironically while discussing Vajpayee government’s failure to maintain communal peace.

In April 2002, when the Godhra riots in Gujarat were being discussed, he had said: ‘On 9 April 1997, some of the NDA friends—I do not want to take their names and hurt their feelings—approached me. They tried to persuade me by saying: “Why are you losing this opportunity? The prime minister’s office is a big office and it is the first time that a farmer has got this opportunity. Why do you want to quit?” I said: “I do not want to be at the mercy of your friends . . .” I have never bothered about continuing in office with this type of humiliation.’

He had mentioned the Vajpayee offer earlier too in December 1998 and had concluded by advising Vajpayee: ‘Some people think that the chair is so important in life. My appeal to them is this: Conduct yourself in a dignified manner.’ In fact, the April 2002 reference was even harsher, when for a second time during the debate, he had told Vajpayee: ‘You can take out those proceedings and go through it. I (had) said: “I do not care whether I will remain for five days or five months. I want to serve my country to the best of my ability.” This was the stand which I took. However, what is going on today? For the sake of continuing in office, you had to compromise with your ideology, your personal ideology, whereas you have been classified as one of the tallest leaders with a moderate, liberal outlook, a man of abundant patience, tolerance, etc.’

Gowda, it appears, keeps a mental list of people who had helped him in difficulty and had been kind to him in crisis. One wonders if he is also in the habit of weighing and counterbalancing every single one of his moves and impending actions by constantly vetting it against this list. There is perhaps another list of those who slighted, insulted and cheated him.

Whatever, Vajpayee had certainly gotten on the list of the generous. He genuinely acknowledged Vajpayee’s seniority, liberal streak, the stature he commanded among his peers as well as the masses, and his vast parliamentary experience.

The opening encounter between the two, when Gowda sought the confidence vote in June 1996, had unraveled his approach to Vajpayee. There were compliments and concessions, but contradictions were exposed at the same time, and there were vague chastisements too. Initiating the motion of confidence, Gowda had said whether Vajpayee was prime minister for ten days or fifteen days, he had his ‘own respect and regard’ for the experience and the maturity the latter had in his parliamentary life.

In the same reply to the confidence debate, he appealed to the liberal side of Vajpayee as well: ‘You have advised me on so many issues. I take your advice and guidance for my future administration. You have got some secular face. That is why they named you the future prime minister of this country. You were able to get twenty or thirty seats more because of that, otherwise things would have been totally different . . . Today you must come forward; with your liberal outlook you must come forward,’ he had said. And since Vajpayee and his colleagues had held forth on corruption and opportunism in their speeches, it was time to expose the doubletalk with two examples—one from nearly sixteen years ago, and another from the glaring present:

‘When the government of Shri Morarji Bhai stepped down— I am not criticizing the role of Shri George Fernandes at that time—Shri Vajpayee, our senior leader at that time was in the government . . . Shri Chandra Shekhar was the president of the party (Janata Party). I was also one of the working committee members in the state unit. Shri Vajpayee and Shri Morarji Desai had both contacted me and asked for the support of Shri Devaraj Urs to that government. Shri Devaraj Urs was branded as a corrupt politician and Shri Devaraj Urs was indicted by a commission of inquiry which was appointed by the government of India. Sir, with all sincerity at my command, I am making this. I am not going to make any allegation. Is it not a fact? Is it not a fact—that is all I am going to ask. For political convenience in this country, all political parties have played their own role for a temporary gain, including Deve Gowda. Yes. Let us search our hearts instead of arguing one against the other. At least let us start a new chapter.’