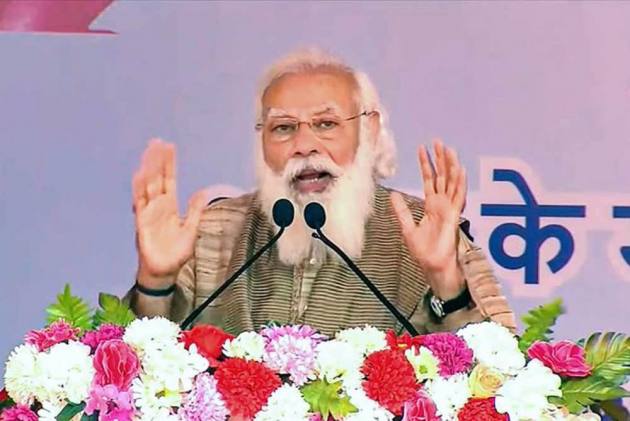 Prime Minister Narendra Modi Friday attacked the BJP's two rival fronts -- Left Democratic Front (LDF) and United Democratic Front (UDF) in Kerala, calling them "twins" of mis-governance, corruption and political violence as he came down heavily on the Left government, saying there was a "total hartal" in the southern state.

PM Modi lashed out the state government led by Pinarayi Vijayan for its action against Ayyapa pilgrims during the Sabarimala protests in 2018, saying that the government tried to "destablise" the sacred place. He also described Devaswom minister Kadakampally Surendran as "one of the masterminds" to shower lathies on the devotees.

"...You have a minister who was supposed to help temples, but he was one of the masterminds to shower lathis on devotees in Sabarimala...Disproportionate assets, disrespecting our women, destroying public propert...this is what local UDF and LDF MLAs are doing.

"When the leaders are like this, people feel unhappy and disconnected from politics", the Prime Minister said, speaking at a rally in Thiruvananthapuram last night.

Modi addressed two rallies in Kerala on Friday -- at Konni, about 35 from the hill shrine of Lord Ayyappa in Sabarimala in Pathnamthitta district and at the state capital later in the day.

The Ayyappa devotees, who should have been welcomed with flowers, were lathi-charged, Modi said, bringing up the Sabarimala women's entry issue at an election rally at Konni, one of the two constituencies from where BJP state president K Surendran has been fielded.

Later, at a rally in Thiruvananthapuram, he took a dig at the CPI(M)-LDF and Congress headed UDF, describing them as "twins" of mis governance, corruption, political violence, casteism, cronyism and nepotism.

Referring to the manner in which former ISRO scientist Nambi Narayanan, who was accused in an espionage case and later exonerated, was treated, Modi termed the Congress as a "shameless party" andsaid it would sacrifice any hard working person in the name of factional feud.

"Congress is such a shameless party that they will sacrifice any hard working person on the altar of factional politics.

Many years ago, in the battle between the I-faction and A-faction, the career of a patriotic scientist Nambi Narayanan was destroyed.

Pointing to the alliance between the Congress and Left in West Bengal, he said both parties were warming up to each other after every election and suggested that they merge.

Slamming the ruling LDF for lacking vision, Modi said there was a "total hartal on governance" in Kerala.

"...the LDF government has failed to show any forward looking vision to solve their (people's) problems.

The Kerala government neither has an innovative development initiative, nor does it expand resources allotted by the Centre for the welfare of the people".

This was happening in many sectors, including health, infrastructure, road construction, disaster management and more, Modi said, winding up his campaign tour of the southern states as he exuded confidence of a huge wave of support for NDA in Tamil Nadu, Kerala and Union Territory of Puducherry.

Listing his government's achievements, Modi said it had opened metros in 18 cities, while only five had metros when his party came to power in 2014.

The state had witnessed violent protests after the LDF government decided to implement the Supreme Court verdict of 2018, allowing women of all ages to offer worship at the hill shrine.

The activists of the BJP and right wing outfits had staged violent protests against the government's decision. "But what has the LDF done? First they tried to distort the picture and image of Kerala and tried to show the Kerala culture as backward.

Then they tried to destabilise sacred places by using their agents, who carried out mischief," Modi said adding that Ayyappa devotees are not criminals.

Modi said Communism had done everything to portray Indian culture in bad light and it will no longer be allowed to trample over the country's culture.