According to sources, the Aam Aadmi Party and Congress may forge an alliance in Delhi and Haryana for the forthcoming Lok Sabha elections and discussions on Punjab seats will be carried out later. 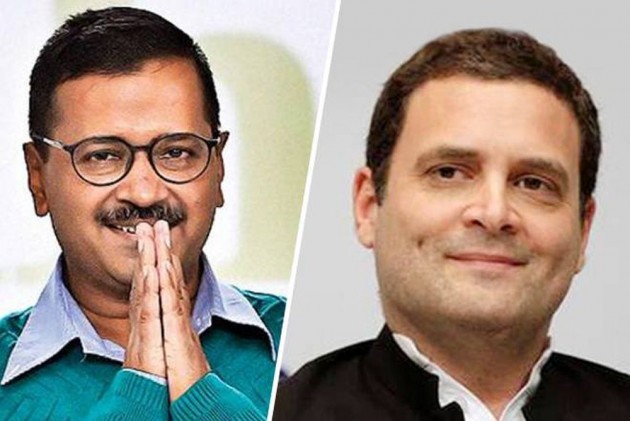 After dithering for weeks, Aam Aadmi Party (AAP)-Congress alliance talks have moved ahead and an announcement on seat-sharing is expected soon, sources told Outlook.

According to sources, the two parties may forge an alliance in Delhi and Haryana for the forthcoming elections and discussions on Punjab seats will be carried out later.

Delhi, which goes to polls on May 12, has seven Lok Sabha seats.

Let's Join Hands In Haryana To Defeat BJP, Kejriwal To Rahul Gandhi After Snub In Delhi

Congress Has Refused To Join Hands With AAP: Arvind Kejriwal

According to AAP sources, the party is willing to give only two seats to Congress in Delhi and it may enter a partnership in Haryana too. While Congress bargained for three seats in the capital, it wasn’t ready to give away more than one seat for AAP in Haryana, it was learnt.

Aam Aadmi Party leaders said that Delhi Congress in-charge PC Chacko and AAP’s Rajya Sabha MP Sanjay Singh held talks till late Friday night to strike a seat-sharing formula in both states. The source also added that Congress leaders have requested chief minister Arvind Kejriwal not to divulge the details of the meetings to the media. “The two leaders have discussed seat-sharing formula and the AAP offered two seats to Congress,” said the leader. It is also learnt that Congress is willing to review its manifesto to accommodate AAP’s demand of full statehood to the capital.

However, Chacko denied reports on Congress- AAP meeting and review of party’s manifesto. “No meetings have taken place yet. Rahul Gandhi is expected to be back tonight and he will take a final call. Hopefully, we will announce the alliance tomorrow,” he said on Friday.

Though Congress has been demanding its candidates contest from New Delhi, Chandni Chowk and North East Delhi seats, the AAP leader said that they may have to yield to the demands of AAP this time. AAP will keep East Delhi seat, where Atishi is in the fray, the leader said.

“Once a consensus is reached, Congress president will take the final decision,” said the AAP leader. When asked about Delhi Congress chief and former chief minister Shiela Dikshit’s resistance to the alliance, the leader said that talks are unlikely to hit further roadblocks as Gandhi has given the go-ahead.

Alliance talks gained a fresh lease of life early this week after Gandhi said his party is open to alliances across the state. Last month, AAP leader Sanjay Singh put forward a proposal with Nationalist Congress Party (NCP) president Sharad Pawar that AAP wants to contest on three seats in Punjab, two in Haryana and five in Delhi.