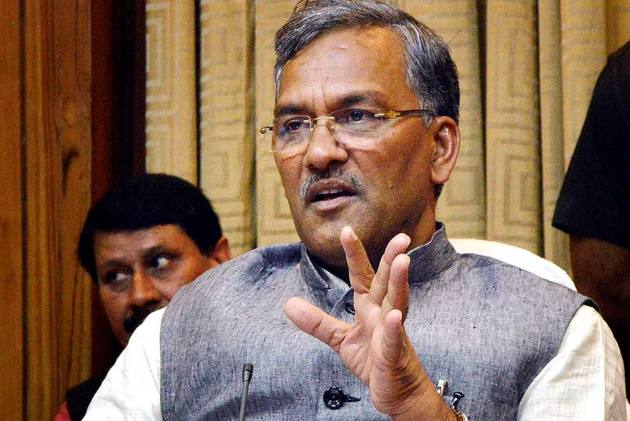 A day after the Uttarakhand High Court directed the CBI to probe the corruption charges leveled by a journalist against Chief Minister Trivendra Singh Rawat, the Opposition Congress demanded his resignation on moral grounds on Wednesday.

"A chief minister, who does not tire of flaunting the state government's policy of zero tolerance towards corruption, has no right to continue in office for a minute after an order like this," state Congress chief Pritam Singh said at a joint press conference, held along with All India Congress Committee (AICC) general secretary and former chief minister Harish Rawat and the newly-appointed party in-charge for Uttarakhand, Devendra Yadav.

Singh said the party is waiting for an appointment with Governor Baby Rani Maurya to seek her intervention in the matter.

Harish Rawat described the court's order as "serious" and asked the chief minister to quit in order to facilitate an impartial probe into the case.

"After the high court's order, the chief minister should quit immediately to pave the way for an impartial probe into the charges against him," he said.

The Congress leader said the party will take up the matter with the governor and continue to fight for justice in the case, using its democratic rights.

Yadav, who is on his first visit to Uttarakhand after assuming the party's charge of the state, said the court order for a CBI probe into the allegations against the chief minister shows the gap between what the ruling Bharatiya Janata Party (BJP) says and what it does.

"It is shocking to see what the BJP government has come to in Uttarakhand after coming to power in 2017 promising clean governance," he said.

Leader of Opposition in the state Assembly Indira Hridayesh and former state Congress chief Kishore Upadhyay were also present at the press conference.

The high court on Tuesday quashed an FIR registered against a journalist for a social media post alleging that a man from Jharkhand deposited money post-demonetization into the bank account of a couple related to the chief minister for the latter's benefit and issued instructions that a CBI inquiry be conducted into the matter.

Issuing the order, Justice Ravindra Maithani also said all documents related to the case be submitted before the court.

Umesh Sharma, the journalist, had filed a petition in the court, seeking quashing of the FIR lodged against him for the social media post, in which he had claimed that one Amritesh Chauhan from Jharkhand deposited money after demonetization into the bank account of Harendra Singh Rawat and his wife Savita Rawat for the personal benefit of Chief Minister Trivendra Singh Rawat.

Bank statements were also attached with the post in support of the allegations. Sharma had claimed that Savita Rawat was the sister of the chief minister's wife.

Harendra Singh Rawat had filed a case against Sharma at a Dehradun police station on July 31, accusing him of blackmail.

He had claimed that the allegations leveled by the journalist were false and baseless and that Sharma had forged the bank statements.

After hearing the parties, Justice Maithani quashed the FIR against Sharma and issued directions for a probe by the Central Bureau of Investigation (CBI) into the matter.