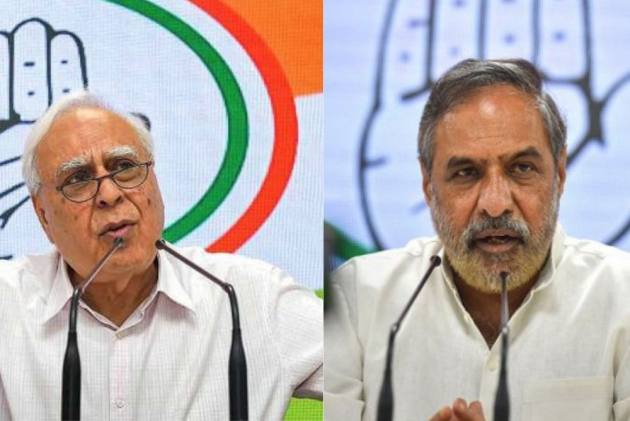 Senior Congress leaders assembled in Jammu to honour Ghulam Nabi Azad, whose tenure as a Rajya Sabha member ended early this month, and mostly discussed about Congress and how to strengthen the party.

The function was organized by Gandhi Global Foundation to felicitate Ghulam Nabi Azad.

The leaders said their identity is Congress and no one can take this identity away from them. They insisted that they have not come from above or backdoor but from the front door and after walking a long distance they have reached their present positions in the party. Leaders like Anand Sharma said they were heirs of the Congress and they will fight with all strength in the upcoming elections from different states.

He said a fight for new "azadi" has begun from Jammu today and it will grow and strengthen the Congress. “Congress has to be strengthened and autocracy has to go,” Sibal added

"We were saddened when we realized that Azad is being freed from Parliament. We didn't want him to go from Parliament. He is an experienced leader and I cannot understand why Congress is not using his experience,” he said. “The country is paramount and if we have to offer any sacrifice to make the country strong we will do. And the Congress party is paramount and if we have to make any sacrifice for the party we will,” Sibal said. He said apart from leaders in Jammu, there are others who have the same view.

“What is the problem before the country? There is such politics in play in the country and such a politician in the country whose sole idea is to make his party powerful not the people of the country. Wherever you see there is some tension, there is a free flow of money to topple the governments, to file cases. The media is under threat, academics are being threatened, and common people are frightened. The country's wealth is in the hands of few people, whose name I don’t want to reveal. This is the reality of the nation and we have to tell this reality to the nation. We have to tell people that the country cannot be run by few industrialists,” Sibal said. He said stadiums; airlines are being named after Modi.

Agreeing with Sibal, senior Congress leader Anand Sharma said India requires Congress but for the past decade Congress has weakened. “Our motive is to strengthen the Congress. The new generation should join it. We have seen good days of Congress. As we grew we saw Congress weakening. We don’t want it weak. This fight to strengthen Congress will be fought from Jammu to Nagpur. We will fight this fight together,” he said. “Those people, who are misleading, I want to tell them Congress is our identity. We have given our lives to Congress. We spent a long journey to reach here. No one among us has come from above and backdoor. We have all come from the front door. We walked and entered from the front door. We have come from student agitation. We haven’t given this right to anyone to tell us whether we are from Congress or not. We will make Congress. We will strengthen the Congress,” Sharma said. Hooda said there was a necessity to strengthen the Congress party as the weak Opposition party was not in favor of the country. He said we are going here with this motive to strengthen the Congress. When it was his turn, Azad took on Rahul Gandhi's "North-South" remark, which has led to a controversy. "Be it Jammu or Kashmir or Ladakh, we respect all religions, people, and castes. We equally respect everyone, that is our strength and we will continue with this," he said