The Modi government has worked with a commitment to economic empowerment of the poor, he said. 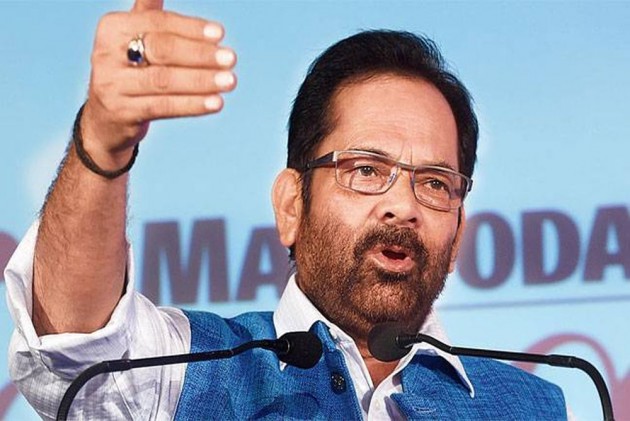 Taking a swipe at the Congress over its proposed NYAY scheme, senior BJP leader Mukhtar Abbas Naqvi on Wednesday said the party which has a "DNA of maximum corruption" is talking about giving minimum income to the poor.

Canvassing for Jaya Prada, the BJP candidate from Rampur Lok Sabha seat, Naqvi said those who failed in the Congress-SP alliance in UP Assembly polls, are now undertaking the "acid test" through the SP-BSP alliance.

"But neither their chemistry nor their physics match," Naqvi was quoted as saying by a statement from his office.

Terming the Congress a "history-sheeter" in "making mockery of poverty", he said the party should realise that "mountain of slogans" cannot get votes for it.

Despite being in power for decades, Congress did nothing for the poor, he alleged. Naqvi said Prime Minister Narendra Modi has worked for the welfare of the poor during the past five years.

The Modi government has worked with a commitment to economic empowerment of the poor, he said.

"The Congress, which has a DNA of maximum corruption, is now talking about minimum income," he said, slamming the opposition party.

On Tuesday, the Congress promised in its election manifesto to roll out a minimum income guarantee scheme — called Nyuntam Aay Yojana (NYAY), under which Rs 72,000 crore would be deposited in the bank accounts of the poorest 20 per cent families in India, annually.

"The Congress, which considers the country's poverty as a political property will not allow the poor to come out of poverty," Naqvi alleged.

They want a prime minister who can be "remote controlled", he alleged.

The people of the country don't want a prime minister on "rotation and contract" for 6 months and then another prime minister for next 6 months, he said.

The entire country knows Modi is the “perfect prime minister” for the progress, prosperity and safety of the country, Naqvi said.