Chowkidar Is Working Tirelessly To Secure Your Future: PM Modi In Ghazipur

Addressing a public meeting, Modi said only a small number of loans were waived in Karnataka after the recent assembly elections in the state, where a JD(S)-Congress government is now in power. 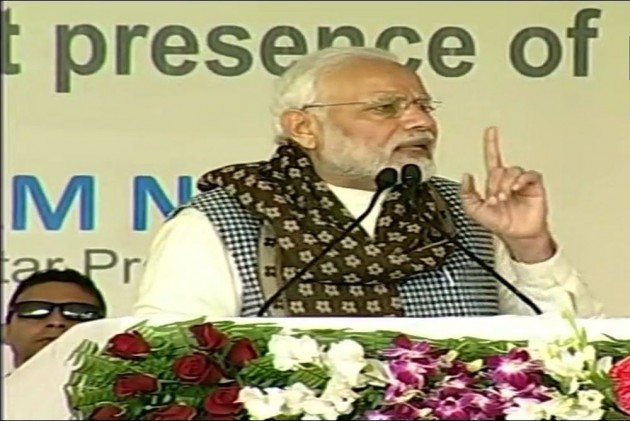 At a time when Congress President Rahul Gandhi is highlighting the loan waivers in three states where the party won assembly polls recently, PM Narendra Modi on Saturday said Congress is a "lollipop company" that has no real concern for the country's farmers.

Speaking at a public meet in Ghazipur, Modi said, "These people are trying to lure you by short-term benefit announcements and promises but all this will not help."

"All these announcements are being done to fool the people," the PM said.

Referring to the long queues of farmers for urea in Madhya Pradesh, where the Congress recently came to power after 15 years, Modi said this was an example of what hasty promises with an eye on votes can lead to.

He alleged that the black-marketeers have come into play in Madhya Pradesh, and the people were paying the price of voting for those who make false and hollow promises.

Modi also tore into the Congress-supported JD-S government in Karnataka.

He said while Congress had promised a farm loan waiver in the state and had made a "government through back door", the state's farmers had been cheated.

"They gave the lollipop of a farm loan waiver, votes were stolen but so far only... the loans of 800 farmers have been waived off," Modi said while exhorting people to understand "such games".

The Congress has promised farm loan waiver in Karnataka. Chief Minister H.D. Kumaraswamy, whose JD-S is a Congress ally, in his maiden Budget had announced that Rs 2 lakh farm loan till 2017 will be waived.

During his interaction, Modi also took a jibe at Congress for the ongoing tussle over the allocation of portfolios among Congress ministers.

“Everyday there is in news as to who happy and who is unhappy. And for what? For some ministerial posts. It seems as the people in power in Karnataka are only there to play musical chair. The poor want to care but those in power are only interested in cabinet berths,” he said.

On Friday, while interacting with the Karnataka BJP workers, Modi said, "Congress' promise of farm loan waiver in the state is a cruel joke."