A senior Congress leader said the decision to withdraw case from the Supreme Court has been left to the Assembly Speaker C.P. Joshi and the party's legal eagles handling the matter. 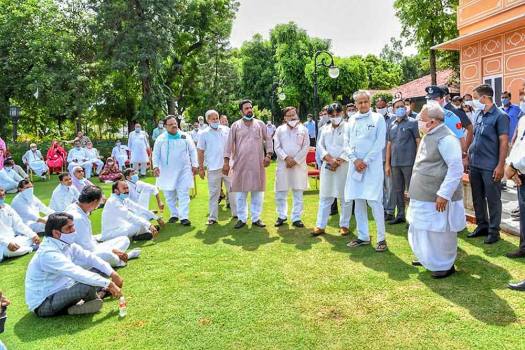 Rajasthan Assembly Speaker CP Joshi on Monday withdrew his plea in Supreme Court, against the High Court order asking him to defer his decision on disqualification notices issued to former Deputy Chief Minister Sachin Pilot and 18 other MLAs.

The SC allowed the Speaker to withdraw the plea. The apex court was slated to resume hearing on Rajasthan speaker's plea on Monday. The Speaker withdrew his plea on grounds that he wants to study the implication of the Rajasthan HC order of July 24.

"HC passed order on July 24, raising several issues and we have to weigh our legal options," Rajasthan Assembly Speaker told the SC.

Rajasthan Crisis: BSP Issues Whip To 6 MLAs To Vote Against Congress In Case Of Floor Test

According to a PTI report, a section within the Congress party had favoured the withdrawal of the petition. It was then left to the Speaker and the party's legal eagles handling the matter.

The Rajasthan Assembly Speaker has moved the Supreme Court after receiving a “direction” from the high court to defer action on the notices sent to dissident Congress MLAs.

Speaker C P Joshi had said he is filing a special leave petition (SLP) before the apex court to avoid a constitutional crisis.

The Congress had sought action against Pilot and the other dissidents under paragraph 2 (1) (a) of the 10th Schedule of the Constitution.

The provision disqualifies MLAs if they "voluntarily" give up the membership of the party which they represent in the House.

The Pilot camp, however, argued that a party whip applies only when the assembly is in session.

The disqualification notice was challenged by the dissident MLAs through the writ petition which was taken up by the bench on Friday last week and arguments were held.

The arguments continued on Monday and concluded on Tuesday. The court had on Tuesday said it would give appropriate order on the writ petition on Friday.

Pilot was sacked as the deputy chief minister and the president of the Congress state unit after he rebelled against Chief Minister Ashok Gehlot.