Congress, NCP Up In Arms Against Sena-BJP Over Felling Of Trees In Aarey Colony

In a veiled dig at Yuva Sena chief Aaditya Thackeray, the Nationalist Congress Party asked where the 'fake environment lovers' were when the hacking of trees began late Friday night. 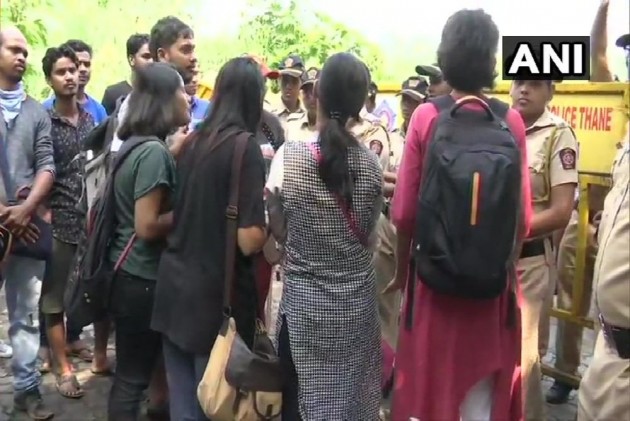 The opposition NCP and Congress in Maharashtra targeted the Shiv Sena and BJP on Saturday, saying the ruling parties have failed to save trees in Aarey Colony.

In a veiled dig at Yuva Sena chief Aaditya Thackeray, the Nationalist Congress Party asked where the "fake environment lovers" were when the hacking of trees began late Friday night.

"The Aarey tree felling is nothing but hitting Mumbaikars by first rendering them helpless. The @ShivSena bedeviled for the last 25 years. Now, it is holding common Mumbaikars to ransom in alliance with BJP," NCP chief spokesperson Nawab Malik tweeted.

The Mumbai Metro Rail Corporation Ltd started cutting trees late Friday night to make way for its car shed, hours after the Bombay High Court dismissed four petitions filed by NGOs and activists challenging the decision to allow felling of trees in the prime green lung of the city.

"Where were fake environment lovers who championed the ban on plastic when the tree felling started?" Malik asked on the micro-blogging site, tagging Thackeray and BJP.

Another NCP leader, Dhananjay Munde, condemned the "slaughtering" of trees and accused the state government of "muzzling" the voices of people who protested against it.

The Congress, on the other hand, asked the Sena if its alliance with the BJP was more important than saving the trees.

"This is the time @ShivSena. You are in the government, can stop this. The Mahayuti (mega alliance) is more important or the mega loss of trees?" Maharashtra Congress spokesperson Sachin Sawant tweeted.

Banners had been placed in Worli, from where Thackeray is contesting the October 21 assembly polls, in which the Shiv Sena leader is seen asking in Gujarati "Kem chho Worli?" (How are you Worli?).