Congress Neither Has Ideals Nor Able Leaders: PM Narendra Modi In Assam

Prime Minister Narendra Modi also urged the people of Assam to be wary of the Congress-AIUDF alliance and alleged that the tie up was a ‘mahajoth’ (grand lie). 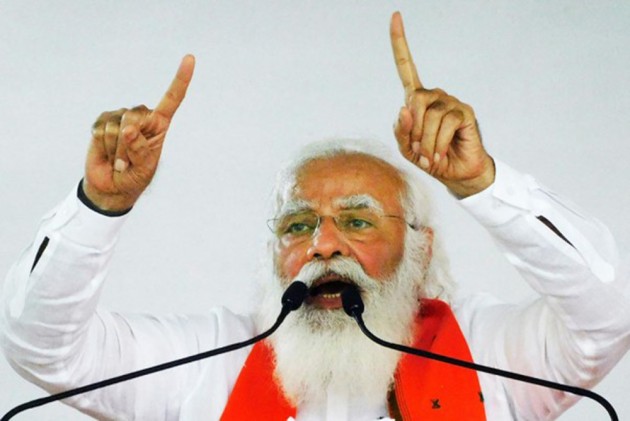 Prime Minister Narendra Modi on Wednesday lambasted the Congress and claimed that the grand old party had no ideals or able leaders to helm it.

Modi further said that the Congress could not protect the country against infiltration or tackle corruption. The prime minister made the comments while addressing an election rally in Assam’s Bihpuria.

Hitting out at the Congress-AIUDF alliance, Modi said that the tie up was a ‘mahajoth’ (grand lie) and he urged the people of the state to be wary of the two parties.

Assam Polls: Every Clause Of Bodo Accord Will Be Implemented Within 2.5 Years, Says Amit Shah

"Congress ke paas na neta hai na niti, sirf Mahajhoot hai (Congress doesn't have either a leader or ideals, it only has a grand lie)," he said.

Congress can only give a guarantee on infiltration, loot, encroachment of lands of 'Satras' (Vaishnavite monasteries) and wildlife sanctuaries, poaching and corruption. These are the basis of the grand lie, Modi added.

"I have come to awaken you to the fact that Congress's hand is with those forces that are a danger to the state's identity and culture," the PM said in an apparent reference to the AIUDF.

Attacking the Opposition alliance, he said that Congress can go to any extent to win elections. "Now Congress has aligned with a party which was born and thrived on the strength of the infiltrators," he said. Alleging that Congress divides people, he said, "They can do anything, betray anyone for votes."

The prime minister claimed that the NDA government has taken steps to check illegal infiltration from Bangladesh and strengthen border security.

"With the people's increasing trust in the BJP government which has protected the state's cultural heritage and traditions, can you hand Assam over to those who will allow entry of illegal immigrants to destroy the state's identity?" Modi said.

He alleged that the Congress didn't even spare the state's pride--Assam Tea and attempted to shame it globally, in an apparent reference to the toolkit controversy.

"It is this Congress which is now making tall claims about taking measures to improve the condition of the tea garden workers whereas, in reality, they did nothing for decades," he said.

The wages of tea garden workers rose by only Rs 100 in 15 years of Congress rule whereas it doubled during five years of BJP-led government in the state, he said.

"We will not leave any stone unturned to improve the standard of living of tea garden workers, particularly women. The NDA government has allocated Rs 1,000 crore exclusively for tea garden workers in this year's Union budget," he said.

"The BJP-led government in Assam has strengthened the foundation of development in the last five years. We will take it forward in the next five years," the prime minister said.

He said the party's poll manifesto, released on Tuesday, has been prepared by keeping in mind the aspirations of the people of the state.

"The 'sankalp patra' (manifesto) is the road map towards 'Atmanirbhar Assam' and it is committed to realising the aspirations of everyone through development and opportunities. The manifesto is also committed to protecting 'sanskriti' (culture), 'suraksha' (security) and 'samriddhi' (prosperity)," he said.

"The double-engine NDA governments are engaged in taking Assam forward by ensuring that all sections of the society get basic facilities and reach the height of their aspirations," he said.

In his Sipajhar rally, the prime minister accused the Congress of creating a rift between different sections of the society and claimed that the BJP, on the other hand, strengthens the bonds between different communities.

"In Assam, it is evident how the people of hills and plains, Barak and Brahmaputra valleys have bonded and at the same time, are preserving and promoting their own cultures and tradition," he said.

Noting that the BJP wins people's trust with sensitivity, Modi said the government's initiatives have paved the way for permanent peace in the Bodoland Territorial Region through the Bodo Accord.

"We had earlier come to you with the promise of 'parivartan' (change). Now, we are vowing to ensure 'tez vikas' (speedy development)," he said.

Greeting the Assam Rifles on its 186th Raising Day, he said, "Assam Rifles has played a glorious role in protecting the nation's security and I salute their courage and bravery from the land of Assam," he added.