The crucial meeting of the Congress working committee on Saturday approved the schedule for organisational polls at various levels. 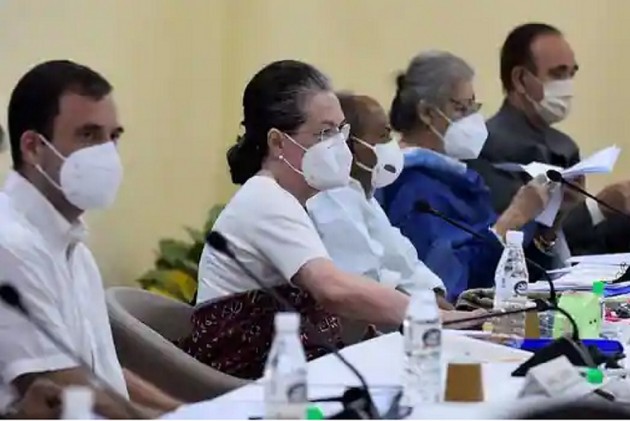 The Congress on Saturday claimed that India is no longer regarded as a democracy and called upon all democratic parties to join hands in resolutely opposing the Modi government.

The party also said that the election of the new Congress president will be held between August 21 and September 20 next year.

The crucial meeting of the Congress working committee on Saturday approved the schedule for organisational polls at various levels.

In a resolution on the political situation in the country, the Congress Working Committee (CWC) said the "assault on democratic institutions completes the sad and shameless narrative of the Modi government".

"India is no longer regarded as a democracy, it has earned the label of an electoral autocracy. Parliament has been contemptuously disregarded. The judiciary has been debilitated by not filling vacancies in courts and tribunals," the CWC said.

The Congress alleged that independent watchdog bodies like the Information Commission, the Election Commission and the Human Rights Commission have been "debased and rendered virtual ciphers".

The media has been threatened into meek submission through raids and false cases, it claimed.

"Non-government organisations (NGOs) have been intimidated and their welfare activities have been halted. The government's agencies have been widely misused to suppress the voice of the people," the resolution alleged.

In a reference to the Pegasus spyware controversy, the CWC said the government has "surreptitiously used malicious spyware" to intrude into the lives of the people.

"Every aspect of democracy has been diminished. The Congress party will resist every sinister attempt to convert the country into a surveillance and police state. Under the Modi government, the constitutional promise of liberty and justice for all has receded into a vain hope," the resolution said.

The CWC believes that it is its duty to sound the alarm bells, it said.

"We do so and call upon all democratic parties and forces to join hands to resolutely oppose the Modi government in order to protect the values on which our country was founded and to advance the causes of the people," the resolution said.

After a nearly five-hour-long meeting of the Congress Working Committee (CWC), Congress general secretary (oganisation)K C Venugopal announced the election schedule which includes a massive membership drive for the polls starting from November 1, 2021 and will go on till March 31, 2022.

Election of Congress president will be held between August 21-September 20, 2022, he said.

Venugopal also announced that election of CWC members and other bodies by AICC members will take place at a plenary session dates for which will be announced later.

The CWC also passed three resolutions, one on the political situation, and two others on inflation and a "diabolical attack" on India's farmers, Venugopal said at a press conference with the party's chief spokesperson Randeep Surjewala by his side at the AICC headquarters in New Delhi.

Former Congress chief Rahul Gandhi, general secretary Priyanka Gandhi Vadra, three Congress chief ministers, among others, attended the meeting, the first such physical meet of the CWC since the outbreak of the COVID-19 pandemic.