Congress Should Treat Us Well Before Striking An Alliance: Deve Gowda

Kumaraswamy and JD(S) leader P G R Sindhia also said Congress cannot take the party's leaders for granted just because they are in a coalition. 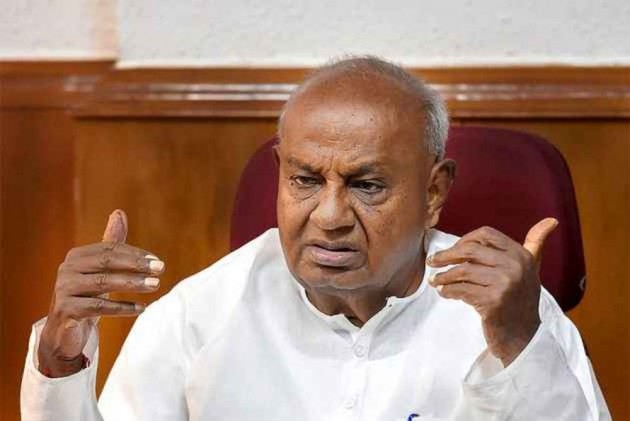 "Congress is big brother of secular parties. They (Congress) should treat us well before striking an alliance for the Lok Sabha polls later this year. The seat-sharing talks are still on," he said addressing party workers late Thursday night.

Gowda also advised Karnataka Chief Minister H D Kumaraswamy, who is also his son, to tolerate the pain he is suffering while running the coalition government.

"I am not going to blame anyone I know how much pain Kumaraswamy is undergoing running the coalition government. He should tolerate this to realise the goal. Whatever the pains, the party has to brush these aside and move forward," the former Prime Minister said.

These comments come in the wake of Gowda pitching for a 2:1 seat-sharing formula for the coming Lok Sabha elections.

JD(S) has been miffed with Congress for "unilaterally" appointing chairpersons to boards and corporations in the state.

Kumaraswamy and JD(S) leader P G R Sindhia also said Congress cannot take the party's leaders for granted just because they are in a coalition.

He also asked the JD(S) workers to strive to get 11 to 12 MPs elected from the party.

Interestingly, Kumaraswamy gave credit to JD(S) on loan waiver omitting the Congress and said, "The Karnataka loan waiver is a model for the entire country. The Janata Dal government made it possible."

On the appointment of chairpersons to boards and corporations, Kumaraswamy said the party would take steps in this regard soon.

He, however, requested party MLAs to make sacrifices and give opportunity to party leaders who were defeated in the 2018 assembly elections to head boards and corporations.