Shah accused the Congress of spreading misinformation on CAA as he addressed a pro-CAA rally in Jodhpur. 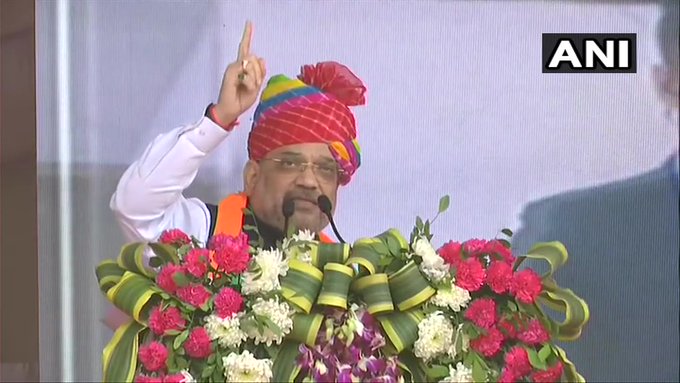 Union Home Minister Amit Shah on Friday said that the BJP won't go back an inch to revoke the Citizenship Amendment Act (CAA) even if all the opposition parties unite. Rather, the party will work hard and reach out to the youth and minorities to make them understand that the CAA has not been introduced to snatch citizenship but to give citizenship to the religiously persecuted minorities from Afghanistan, Bangladesh and Pakistan.

Speaking at a pro-CAA rally held in Jodhpur, Shah attacked the Congress saying the party mislead people on the law.

"The Congress is carrying out a misinformation campaign against Citizen Amendment Act," he said.

"The (central) government will not back out on the Citizenship Amendment Act. The law is not against minorities," said Shah, adding, "No provision in the amended law will take anyone's citizenship away; it is a law to grant citizenship."

He further said, "Even if all these parties come together, BJP will not move back even an inch on this issue of Citizenship Amendment Act. You can spread as much misinformation as you want."

Shah also challenged former Congress president Rahul Gandhi saying that if he has not studied the law, he should go to a corner and check to find out what this law means.

"CAA has been introduced to give citizenship to persecuted minorities from three nations," he said adding that he can translate it in the Italian language too if Rahul Gandhi doesn't understand this basic fact.

Shah said the CAA is being opposed by those who have become habitual to playing politics and they have started a wrong campaign over it to mislead the youth of the country and hence, we decided to reach out to the people and make them aware of it.

Shah came down heavily on Rajasthan Chief Minister Ashok Gehlot in Jodhpur, which is the CM's home turf for over the last 40 years, asking him to stop playing politics on the CAA and instead pay attention to infants dying in Kota as the bereaved mothers are cursing him.

He also asked Gehlot to stop bowing his head at the Delhi durbar and instead start looking into the state's affairs.

Shah claimed that the Congress government in its manifesto had announced granting citizenship to migrants from Pakistan, however, they could not do it because they were thinking of their vote bank and were busy playing politics for the same.

The Home Minister asked why was the country divided on a religious basis and who triggered the division of the nation? It was the Congress who divided the country on religious grounds, he said.