Before Rahul Gandhi arrived at the Punjab-Haryana border, senior Haryana police officials told reporters that they would not allow more than 100 people to gather at one place. 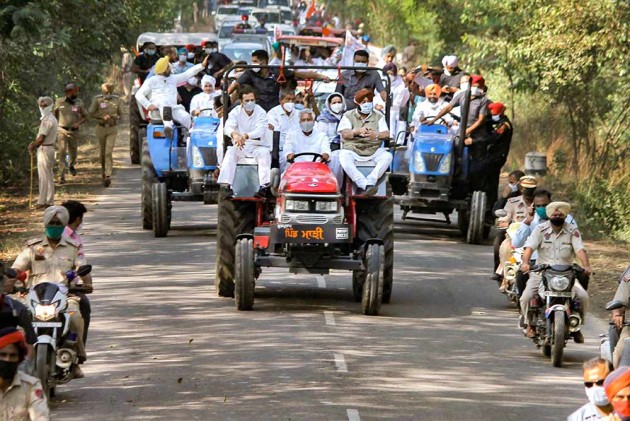 Amid high-drama at Haryana's border with Punjab, state authorities allowed  former Congress chief Rahul Gandhi and a few party leaders to enter the BJP-ruled state as part of his rally against farm laws.

After winding up his last rally at Sanaur in Patiala, Gandhi drove a tractor to reach Haryana border on the concluding day of his "Kheti Bachao Yatra".

He was accompanied on the tractor by Punjab Congress president Sunil Jakhar and senior party leader Harish Rawat.

A number of Congress workers were accompanying Gandhi from Punjab's Patiala district, but the procession was stopped on the highway near Teokar village on Pehowa border for an hour.

Before Gandhi arrived at the Punjab-Haryana border, senior Haryana police officials at the spot told reporters that they would not allow more than 100 people to gather at one place as per the guidelines in place due to the COVID-19 restrictions.

Gandhi and a few Congress leaders were later allowed to enter Haryana where the former Congress chief has a couple of programmes scheduled.

Ahead of Gandhi's tractor rally in Haryana, the BJP-led government on Monday had said the Congress leader can bring a few people in the state but it will not permit a big crowd from Punjab which can "disturb" the atmosphere.

Chief Minister Manohar Lal Khattar said Gandhi has the right to put forth his views but "if he comes with a big procession from Punjab, we won't allow it".

Haryana's Home Minister Anil Vij had said if Gandhi comes with "a big crowd from Punjab to disturb Haryana's atmosphere, then we will not permit it. We are not going to allow that".