Congress Was The ‘James Bond Of Spying’ When In Power: Mukhtar Abbas Naqvi On Pegasus Row

On the Opposition insisting on debating the Pegasus issue, Union minister Mukhtar Abbas Naqvi said they want to waste Parliament's time on ‘fake and fabricated issues that have no identity’ 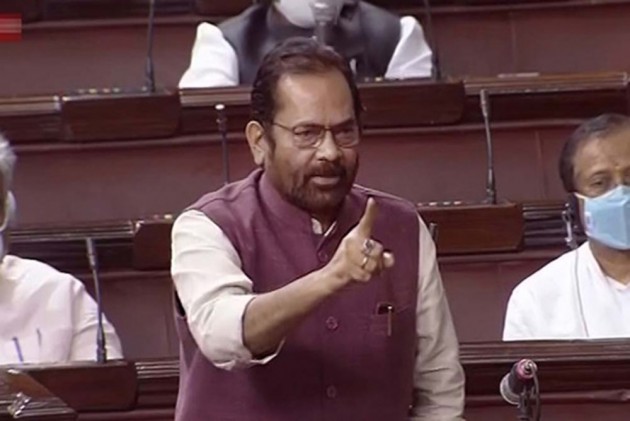 Attacking the Congress which has been protesting in Parliament demanding a discussion on the Pegasus snooping allegations, Union minister Mukhtar Abbas Naqvi on Sunday said the party was "James Bond of spying" when in power and it now wants to waste Parliament's time over "fake and fabricated" issues.

Naqvi, who is the Rajya Sabha Deputy Leader, also accused the Congress and a few other Opposition parties of working with the policy of "rant and run" by making allegations and scooting off.

In an interview with PTI, the Minority Affairs Minister said the government is ready to discuss all issues that are related to people and expressed hope that the impasse between the government and the Opposition will be broken allowing Lok Sabha and Rajya Sabha to function smoothly.

Both Lok Sabha and Rajya Sabha have failed to transact any significant business, except passage of some bills, amid continued protests by Opposition parties over the Pegasus and farmers' issues since the Monsoon session of Parliament commenced on July 19. The Opposition and the government are locked in a standoff with the former seeking a debate over the Pegasus issue.

The senior BJP leader also rejected talk of the Parliament's Monsoon session being curtailed and said there was no basis of such "rumours" as the session was to scheduled till August 13 and business is listed till then.

Asked if a middle path can be found to end the deadlock in Parliament, Naqvi said the Congress and a few other Opposition parties are adopting a "rant and run" formula and are not interested in participating in debate and discussion on people's issues.

On the Opposition insisting on debating the Pegasus issue, Naqvi said they want to waste Parliament's time on "fake and fabricated issues that have no identity".

"Without wasting time, IT Minister (Ashwini Vaishnaw) had made a statement and they had an opportunity to get a clarification in Rajya Sabha. But instead of taking a clarification they created a ruckus and adopted a violent attitude," he alleged.

Naqvi said most of the Opposition parties are interested in debate and discussion but unfortunately the Congress is trying to be their self-appointed head and in that attempt it is "propagating its own negative attitude as that of the Opposition".

"They (the Congress) are trying to hijack the thinking of even those opposition parties that are thinking on constructive lines. Congress is trying to become a self appointed leader of the Opposition," the Rajya Sabha MP said.

Naqvi said the Congress also tried to "mislead" people on the Rafale jets issue and wasted Parliament's time and everybody knows what happened as they were exposed.

"These people (Congress) were the James Bond of spying (when in power). They spin a web of spying when in government and when in opposition create a hullabaloo alleging surveillance," Naqvi said, making a reference to the fictional super spy character that novelist Ian Fleming created on which several movies have been made.

In the UPA time, their own finance minister had accused his government of spying on him, he said.

"They want to create that atmosphere even now, though there is no substance in these allegations," the minister asserted on the Pegasus snooping row.

An international media consortium has reported that over 300 verified Indian mobile phone numbers were on a list of potential targets for surveillance using Israeli firm NSO's Pegasus spyware.

Opposition leaders, including Rahul Gandhi, two union ministers -- Prahlad Singh Patel and Railways and IT Minister Ashwini Vaishnaw -- businessman Anil Ambani, a former CBI chief, and at least 40 journalists are on the list on the leaked database of NSO. It is, however, not established that all the phones were hacked.

The Congress and several other Opposition parties are demanding a Supreme Court-monitored probe into the allegations and also asking the government to come clean whether Pegasus spyware was used or not.

Naqvi said the government has stated that it is ready to discuss all issues that are related to the people and the Opposition parties should give notices over it on which the Speaker in Lok Sabha and the chairman in Rajya Sabha will decide.

The Rajya Sabha deputy leader said the government is reaching out to opposition leaders and there is no communication gap.

"In a day, three-four times discussion is happening with opposition leaders but unfortunately what path the leadership of the grand old party wants to adopt is baffling," he said.

Asked about the Opposition's charge of the government passing bills amid din without debate, Naqvi said they should look at their own history as to how many bills were passed by the UPA amid din.

"The din during their time would have been due to Commonwealth, 2G spectrum scams, but they don't have any issue. It is an issueless Congress party," he alleged.

"We humbly request the Opposition to participate in debate and discussion. They can give notices on the issues they want to discuss and the speaker and chairman will allot time and day," he said.