Congress leader Rahul Gandhi along with a group of other Congress MPs will visit Hathras today afternoon. 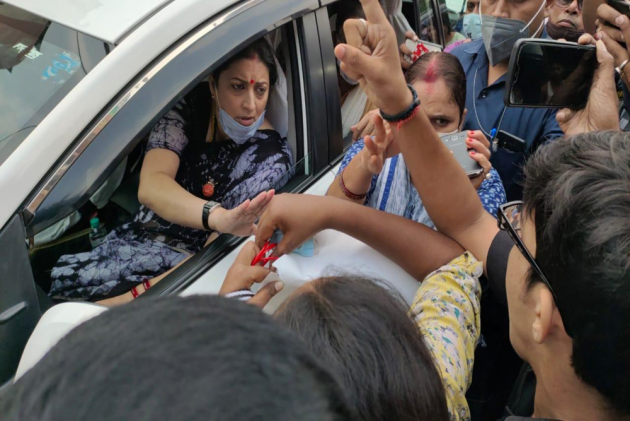 Union Minister Smriti Irani’s car was stopped by Congress workers protesting over the Hathras gang-rape case in Varanasi. The workers demanded her resignation over the increasing sexual assault cases.

The protesters raised anti-government slogans and demanded justice for the woman's family.

The Union minister is in Varanasi to hold a dialogue with farmers and agriculture scientists.

Congress leader Rahul Gandhi along with a group of other Congress MPs will visit Hathras today afternoon.

On Thursday, Rahul and Priyanka Gandhi Vadra were detained near the UP border as they tried to enter the state to go to Hathras and meet the family of the victim.

The 19-year-old Dalit woman was allegedly raped at a village in Hathras by four men on September 14. After her condition deteriorated, she was referred to the Delhi's Safdarjung hospital where she breathed her last on Tuesday.

Local police officers, however, had said the cremation was carried out "as per the wishes of the family"

Protests and candle marches were held in several parts of Uttar Pradesh, West Bengal, Delhi, and Maharashtra on Wednesday after news reports claimed that the Uttar Pradesh Police “forcibly” cremated the body of the Hathras rape victim on Tuesday night.