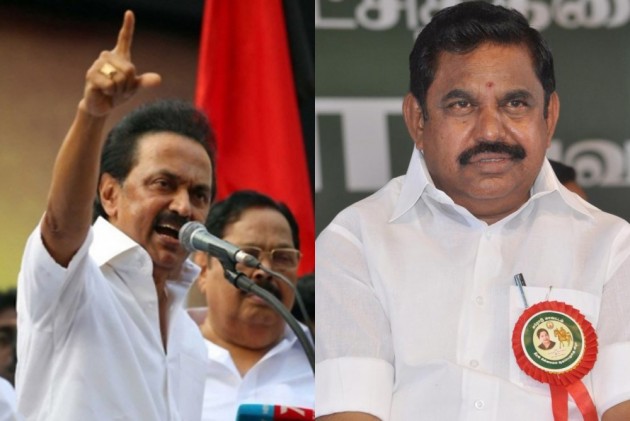 The Bhoomi Pujan of the Ram temple at Ayodhya is having its own political reverberations in Tamil Nadu with the ruling AIADMK scoring a few brownie points against rival DMK on the issue.

Chief Minister Edappadi K. Palaniswami joined the celebratory mood prevailing in the country by congratulating Prime Minister Modi “for fulfilling the dream of Hindus by building a temple for Lord Rama at Ayodhya.” He also recalled how Jayalalithaa as Chief Minister during the National Integration Council in November 1992 had stressed that a temple for Ram should be built at Ayodhya even while stating that the mosque should not be disturbed.

'Ram Lalla In Green On Aug 5? No Controversy Over Colour Of Clothes': Banaras Scholar

On Wednesday it was the DMK that was upset and embarrassed by the fervour displayed by Congress leaders from Priyanka Gandhi to Kamal Nath to ride the Ram-Ayodhya wave by openly flaunting their support for the temple’s construction. The DMK’s embarrassment was further heightened by the AIADMK recalling some of the snide remarks made by former DMK Chief M. Karunanidhi against Lord Ram when there was opposition to the Sethusamudram Canal project since it would cut through the Ram Sethu.

Irritated by the opposition by the BJP and the project being challenged in the Supreme Court as that would destroy the bridge built by Ram and his army, Karunanidh had sarcastically asked “in which engineering college did Ram study?” On another occasion he had also claimed that Ram was drunkard, citing a passage from Valmiki Ramayana which had said Ram used to drink “madhu”. “The DMK is at a loss how to react to its present ally Congress now singing paeans for Ram while Stalin's own father had ridiculed and humiliated Ram with his uncharitable remarks on Ram’s engineering qualifications and Ram being a drunkard,” observed Aspire K. Swaminathan secretary of the AIADMK’s IT wing.

The state BJP, riding on the support it received on the “Kanda Sashti Kavasam” issue is now exploiting the Ram temple’s bhoomi pujan to put the anti-Hindu brigade of the state on the defensive. “Those who questioned the very existence of Ram have been silenced by the public enthusiasm today’s event has generated in the country. On the Sethusamudram issue the then Congress government had stated in the Supreme Court that Ram and Sita were only fictional characters and that Ram Sethu was not a man made structure. Now Priyanka Gandhi says Ram belongs to everyone,” pointed out BJP spokesperson S.R. Sekar. He too asked how the DMK would respond to the Congress' new found reverence for Ram.

DMK sources claimed that the Congress response to the Ram temple must be seen in the context of the national party’s political calculations in Uttar Pradesh and other states where the temple will have an impact on the politics of those states. “In Tamil Nadu Ram temple is not a big issue but up there in North India it has always been an emotive issue and the Congress cannot be seen to be lagging behind in its support for the construction of the temple. So the reactions of the Congress leaders from these states are quite predictable,” admitted a DMK office bearer.

At the same time the DMK’s support for the Sethusamudram Project cannot be questioned as it was aimed at improving the economy of the region and should not fall prey to sentiments like the destruction of Ram Sethu. “The matter is pending in the Supreme Court for over a decade. It is time the Court gave a verdict,” he said.