The demand was made by Akhtarul Iman, state president of Asaduddin Owaisis AIMIM to replace the word Hindustan with 'Bharat' as it is in the Constitution 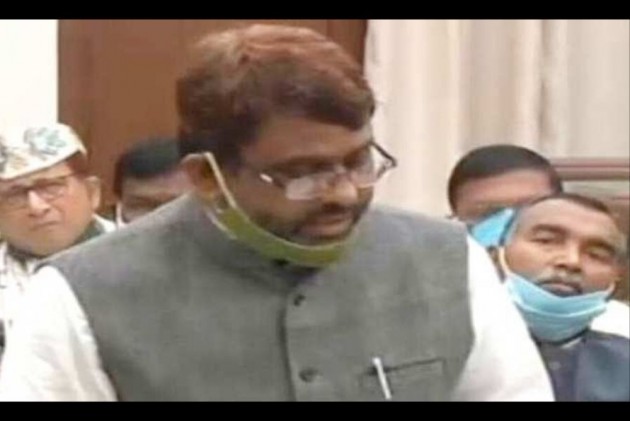 A controversy erupted on the floor of the Bihar Assembly on Monday when a legislator from AIMIM insisted that the draft for the oath in Urdu should have
"Bharat", as it is in the Constitution, instead of the seemingly eclectic "Hindustan".

The demand was made by Akhtarul Iman, state president of Asaduddin Owaisis AIMIM no sooner than he rose to take oath in Urdu.

It left the pro-tem Speaker Jitan Ram Manjhi visibly bewildered who pointed out that as per convention those who take oath in Urdu said "Hindustan".

The chair, however, permitted him to use the word Bharat.

Iman whose party champions the cause of minorities while wearing its patriotism on the sleeves, was stormed by journalists who wanted to know why he had an objection to "Hindustan" which is used by people of the country in common parlance.

He asserted that he had "no problems with the word Hindustan", having grown up reciting Iqbals famous poem "Saare jahaan se achcha, Hindustan hamaara" and appreciated "personal choice" exercised by leaders like Congress MLA Shakil Ahmed Khan who prefered to take oath in Sanskrit.

He also dismissed suggestions that his stand would "hurt Urdu-speaking population" who have been opposed to Sanskritisation holding it to be an assertion of Hindum majoritarianism.

However, the ruling NDA reacted with predictable distastem to the development, which helped All India Majlis-e-Ittehad-ul-Muslimeen (AIMIM) hog some more limelight after havingm caused a splash in the assembly elections in which it won five seats and is said to have affected the outcome in a number of
others.

"Hindustan is a commonly used word but some people create unnecessary controversy in a bid to look different", said former minister and JD(U) MLA Madan Sahni.

BJP MLA Neeraj Singh Bablu appeared nonplussed and remarked "those who have a problem with uttering Hindustan, should go to Pakistan".